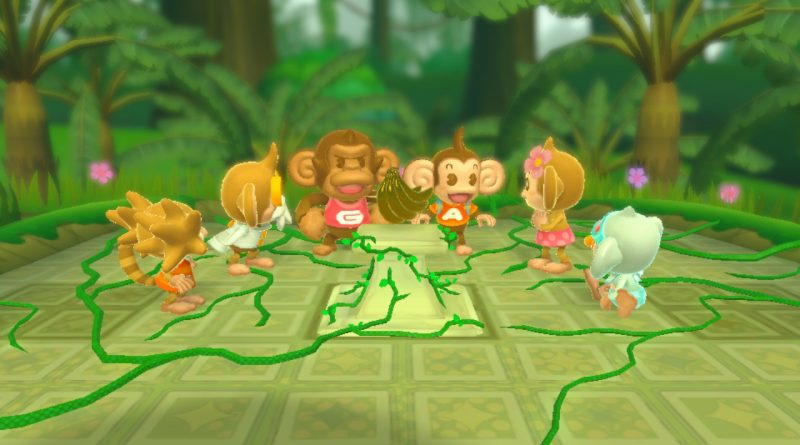 By any given measure, Super Monkey Ball: Banana Blitz HD is a reclamation project of sorts. Banana Blitz wasn’t a particularly well-received entry at the time, and the intervening years have not seen a late fandom grow around it. So why is it, of all the Super Monkey Ball games, getting a remaster? One potential reason is that decision-makers at Sega thought it had an undiscovered appeal buried under its early motion controls and lack of development focus.

Or… maybe the code was more readily available? 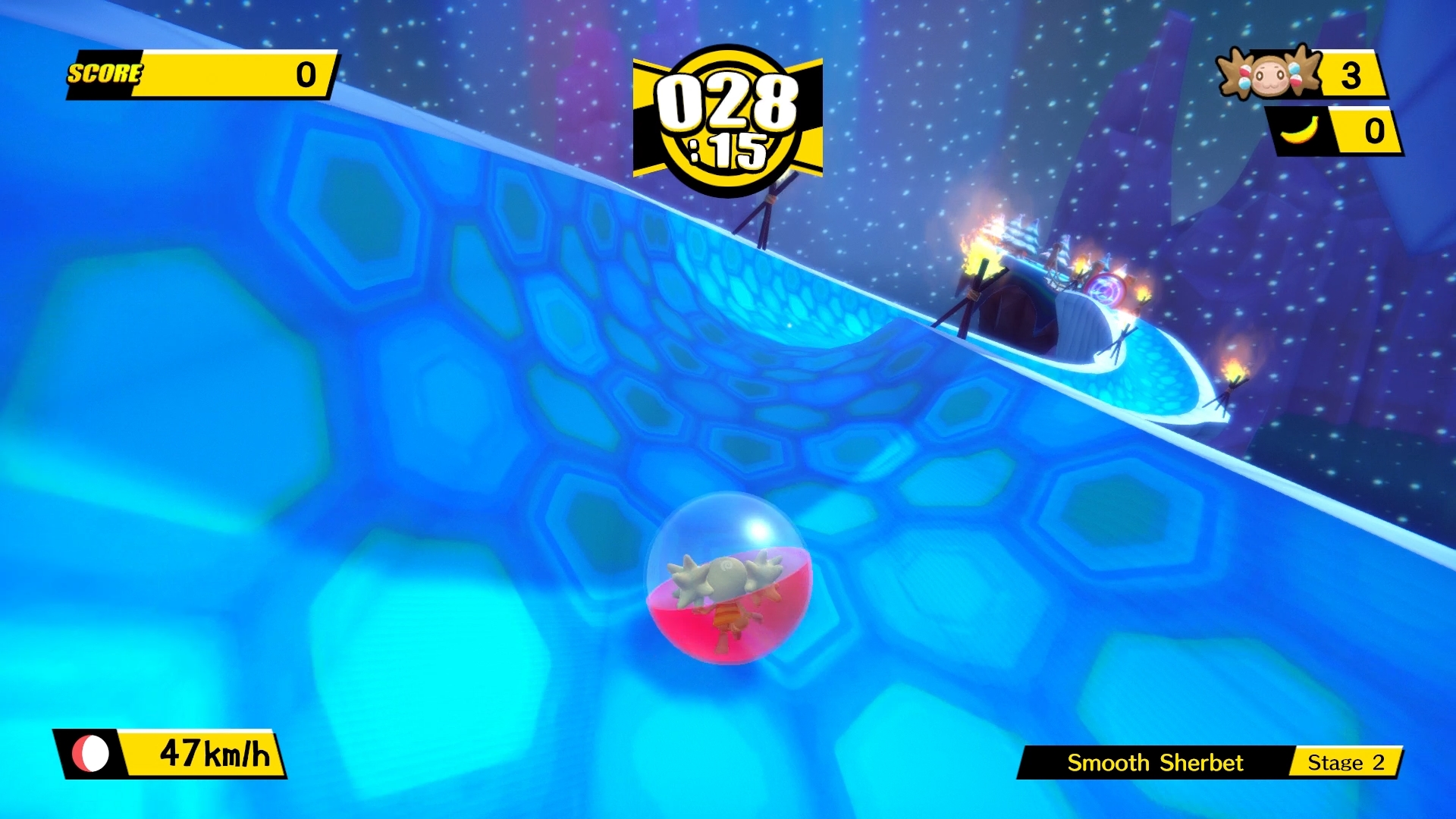 Critical consensus at the time of Banana Blitz‘ initial release (which, well, included us) generally boiled down to a few particular sticking points: that its loose implementation of motion controls with a game that required precision brought down the experience, and that its kitchen-sink approach to its features and minigame selection meant that no one element really got the development attention it needed.

A successful reclamation project requires more than just knowing what to do. It requires precise execution of that plan or you’re going to fall out.

Given those points, the approach that developer Ryu Ga Gotoku Studio took seems like a smart one: implement traditional controls, cut away the garbage and coat everything with a level of polish and modern conveniences like online leaderboards. Of course, much like a Super Monkey Ball level itself, a successful reclamation project requires more than just knowing what to do. It requires precise execution of that plan or you’re going to fall out. 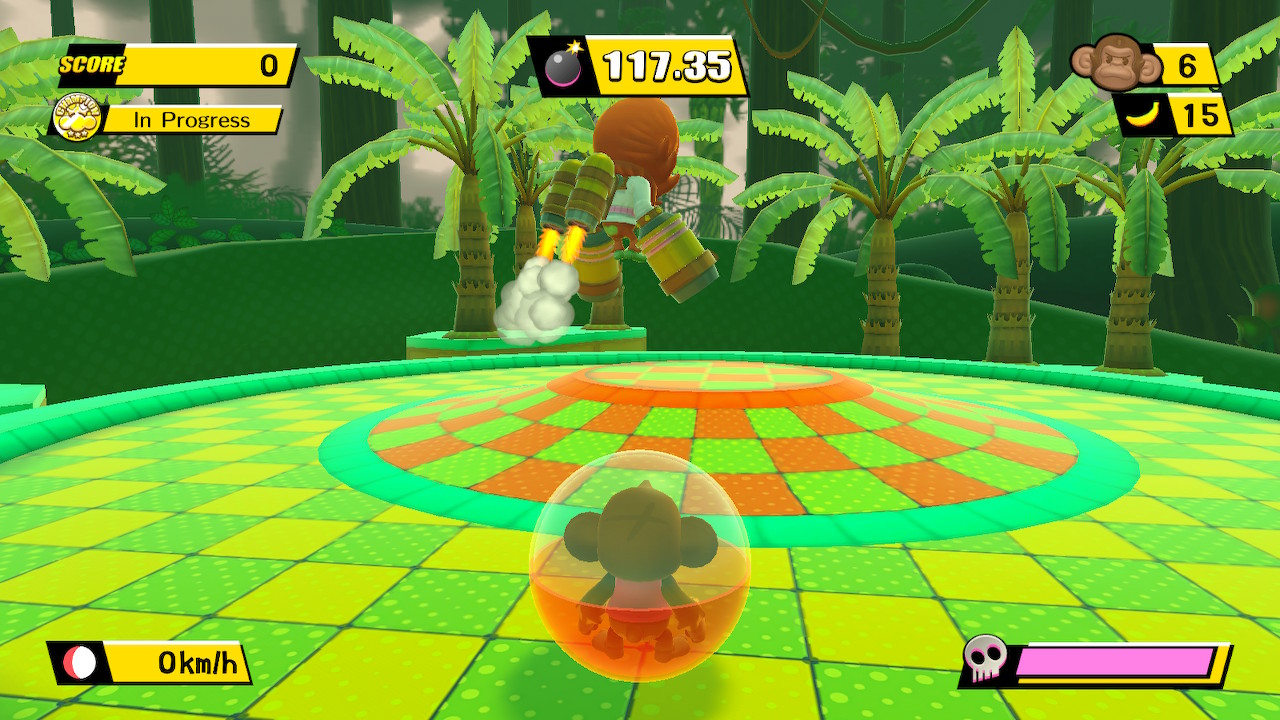 The full single-player experience is included here, and it’s largely intact. It still packs acquired tastes like the jump button and boss battles, and while the former’s understandable given all the level changes that’d need to be done, the latter could have totally been cut. They were an attempt to make a “traditional game” in the mid-2000s sense with a story and antagonists, but these days we know all sorts of game concepts and scales can work.

The fundamental way you play through these levels and bosses has changed through the new traditional control scheme. Instead of tilting, you’re just using a trusty analog stick. Imagine that! The implementation of these controls ends up feeling a bit stiff and clunky in comparison to what you’d expect (though we can only speak to the Switch release; perhaps another platform nails it). Still, it’s a usable scheme. It’s the level design itself that will slow down your enjoyment, as it’s clear the original dev team knew how hard it was to use the tilt controls and threw obstacles and curbs everywhere to try to contain players and make things a bit easier. As a result, this re-implementation often feels easy and slow for all but exploit-happy high-level players. Taking just a bit more effort to adapt levels would have helped quite a bit.

As for the boss battles… they can’t be helped. They’re still pointless inclusions that ruin the pacing of a dedicated run. 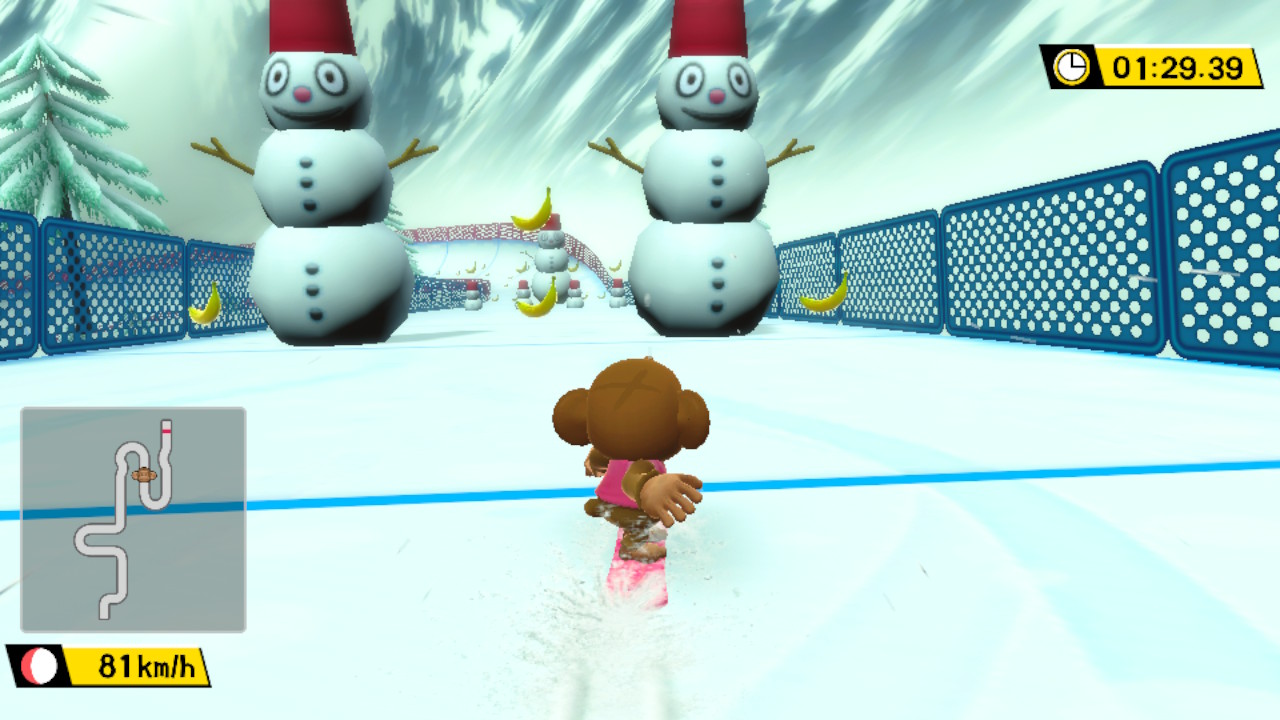 The minigames offered in Banana Blitz HD are pared down to ten “most popular” options from the original’s ludicrous 50. While there were definitely only about ten good ones in the original, it’s hard to believe that someone thought they were these ones. Some, like Slingshot and Whack-a-Mole, make very little sense when separated from motion controls. Others, like top-down shooter Space Monkey Attack and downhill race Monkey Snowboard, are simply weak implementations of their ideas that don’t have much value being preserved in any form. and then there’s the tank-controls-on-ice Hovercraft Race, which isn’t going to be fun to play no matter what you change.

The most successful party games here are the ones that take the Monkey Ball ethos and extend it to a different challenge. Seesaw Ball, even without motion controls, is a vertical version of the “tilt the world and collect bananas” formula upon which the franchise is built. Dangerous Route is a take on the “carefully navigate a path” game that’s a whole genre in Japan and only an occasional inclusion as a side mode everywhere else, and… yeah, if you like the hardest Monkey Ball levels, it could be up your alley. Hurdles and Hammer Throw are forgettable, but the true tragedy is the progenitor of Monkey Ball minigames, Monkey Target. This version is so finicky and limited in ways that had nothing to do with control schemes, and it’s just not a party showpiece like its predecessors. 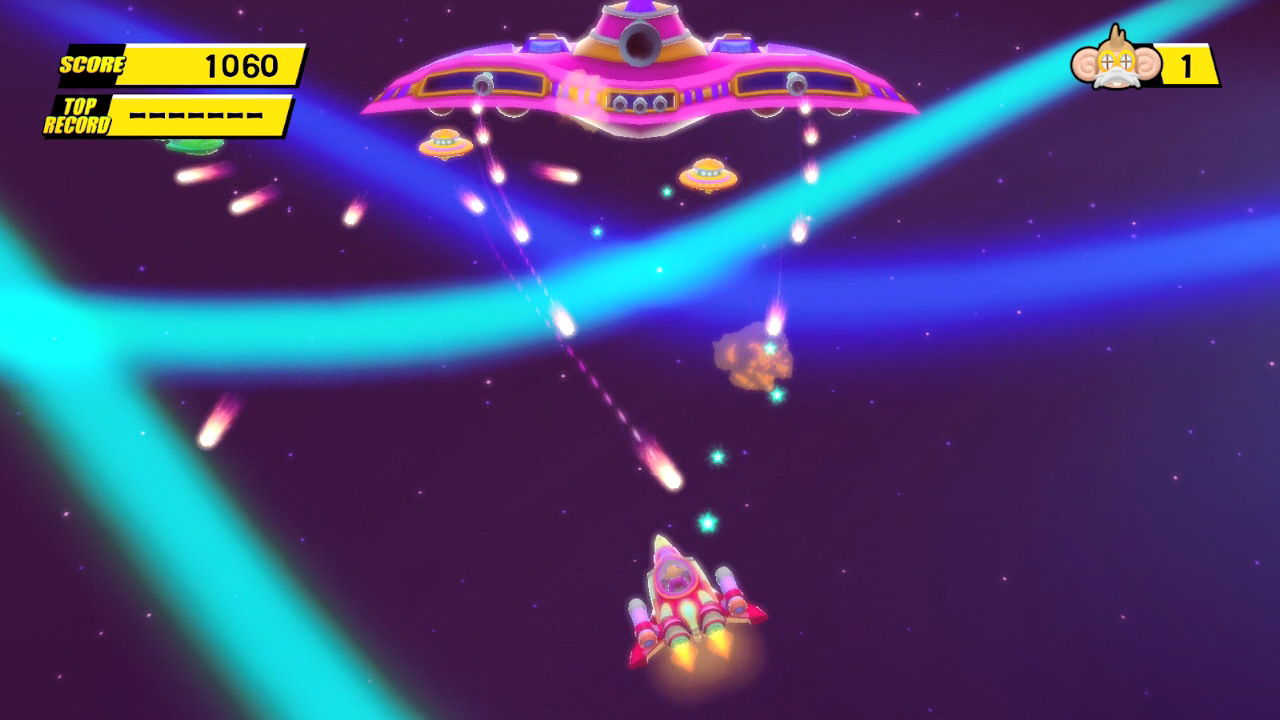 Also dropped from the original release is any sort of way to play games in a row with friends for a more interesting competition. There’s a “decathlon” mode for playing all the games in a row by yourself and competing on leaderboards, which… we get that the game’s about score chasing, but these party games are for parties, and playing a minute of something and then being thrown back to a menu just isn’t satisfying.

Party games are for parties, and playing a minute of something and then being thrown back to a menu just isn’t satisfying.

Some credit is due to the team, though, for Banana Blitz HD‘s revamped aesthetics. The menus are slick and fun, and they’re a heck of a lot more usable than the Wii’s ill-advised tilt-based selection. The interface elements in-game look very nice with a consistent yellow-and-black scheme, and the levels themselves look crisp and clean. There were apparently licensing issues with the original soundtrack, but what’s included here is fine and fits well with the frenetic tone and pacing of the gameplay. 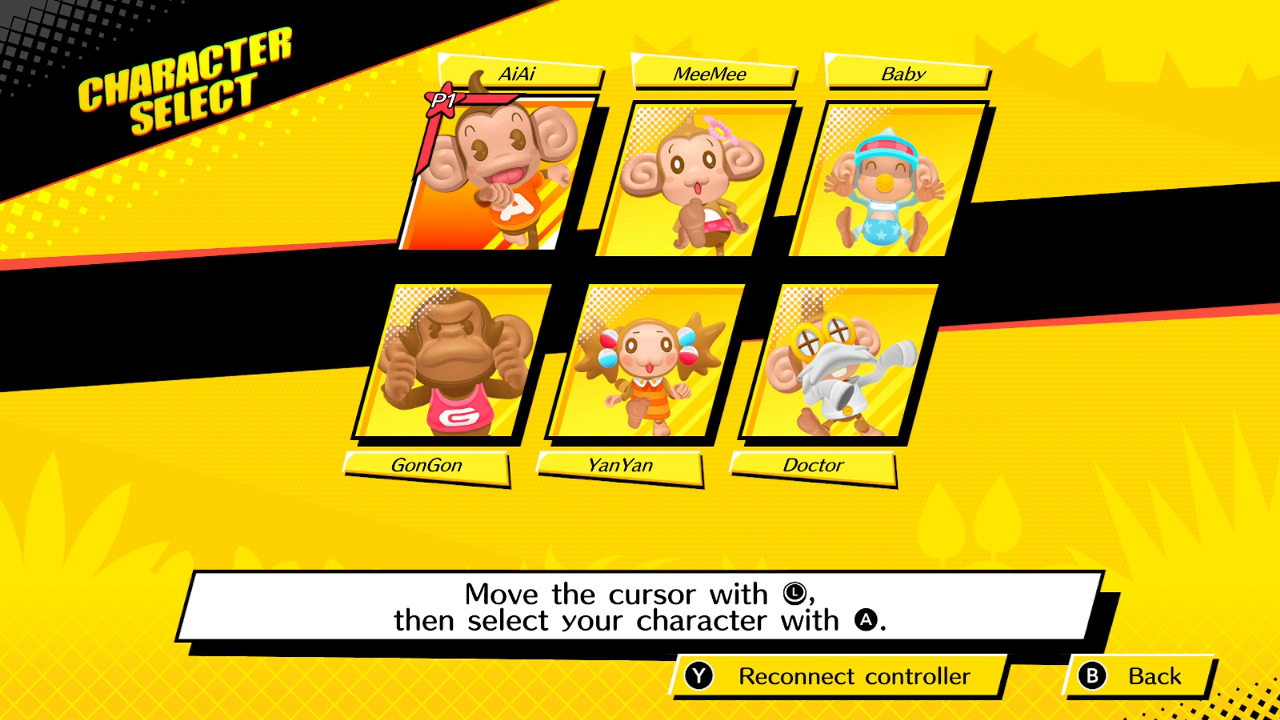 It takes a flawless effort to make a franchise’s dud entry into a refined gem, and Super Monkey Ball: Banana Blitz HD simply isn’t that. It’s nice to see Super Monkey Ball back on modern platforms, and being handled by the team that bears the original’s lineage shows that it isn’t a low-priority outsourced project. And… Sonic’s in it? But it just doesn’t come together.