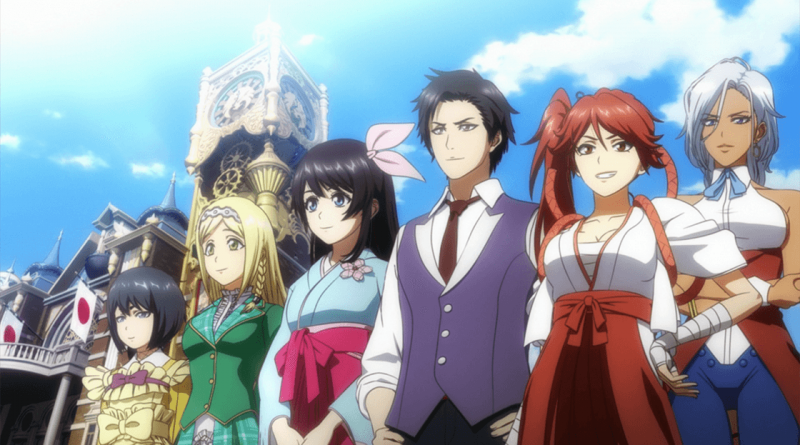 Fifteen years ago, in 2005, the last “real” Sakura Wars game was released. Sakura Wars: So Long, My Love introduced Japan to a New York Combat Revue and the promise of new characters for the series, then five years later introduced the rest of the world to the series as a whole. It was a great game that blended visual novel elements, relationship building and thoughtful strategic endeavors into one experience. With Sakura Wars, the reboot set two years after the fifth installment, it at least gets two out of three right. 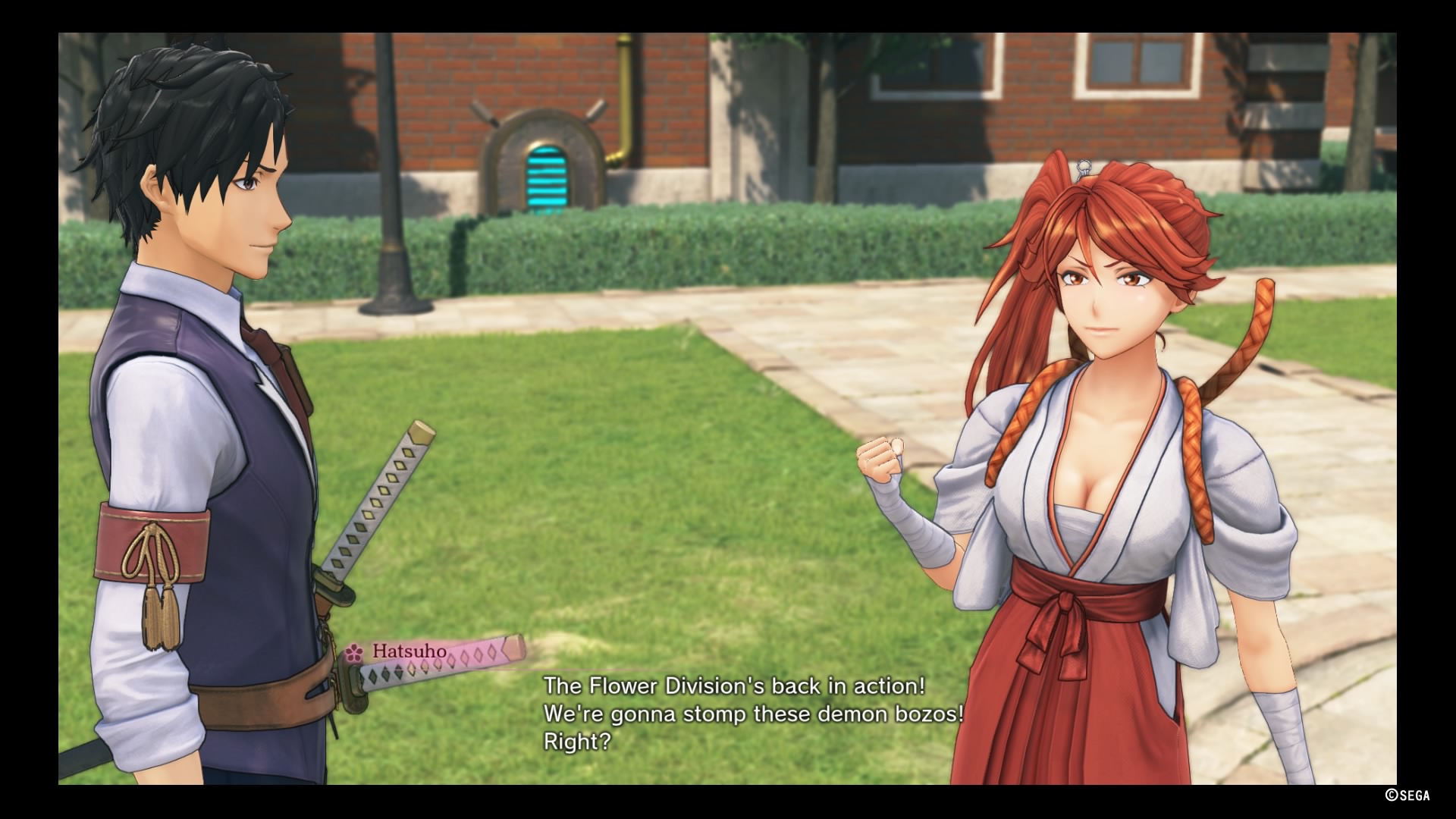 Seijuro Kamiyama has just come off of an assignment that left his ship destroyed by demons, though everyone onboard managed to survive and the civilian ship he was protecting was able to get to safety. Still, the captain now finds himself in Tokyo at Ginza’s Imperial Theater. Sumire Kanzaki, former original Imperial Combat Revue member, has formed a new Flower Division there. Except… it isn’t doing so well. When Kamiyama arrives as the new captain, there are four members and one is absent. None of them have any performing skill. Their kobu Spiricle Fighter Mugens are barely functional. The theater is falling apart. Worst of all, the Flower Division will be disbanded and shut down if they lose the Combat Revue World Games.

What follows is an adventure that is structured like an anime series, complete with chapter titles and intermissions, as Kamiyama and his crew build themselves up, forge bonds that will help them excel and somehow single-handedly grow into a force capable of taking on the strongest demonic foes.

Since this is Sakura Wars game and you’re playing as the captain of said division, I think you can gather that your input will make a difference. What follows is an adventure that is structured like an anime series, complete with chapter titles and intermissions, as Kamiyama and his crew build themselves up, forge bonds that will help them excel and somehow single-handedly grow into a force capable of taking on the strongest demonic foes. It works well and is structured in such a way that everyone gets a chapter to focus on who they are before you really get into the thick of things. The pacing is handled well and there’s a good natural progression as you build up to that chapter’s big fight against demons. 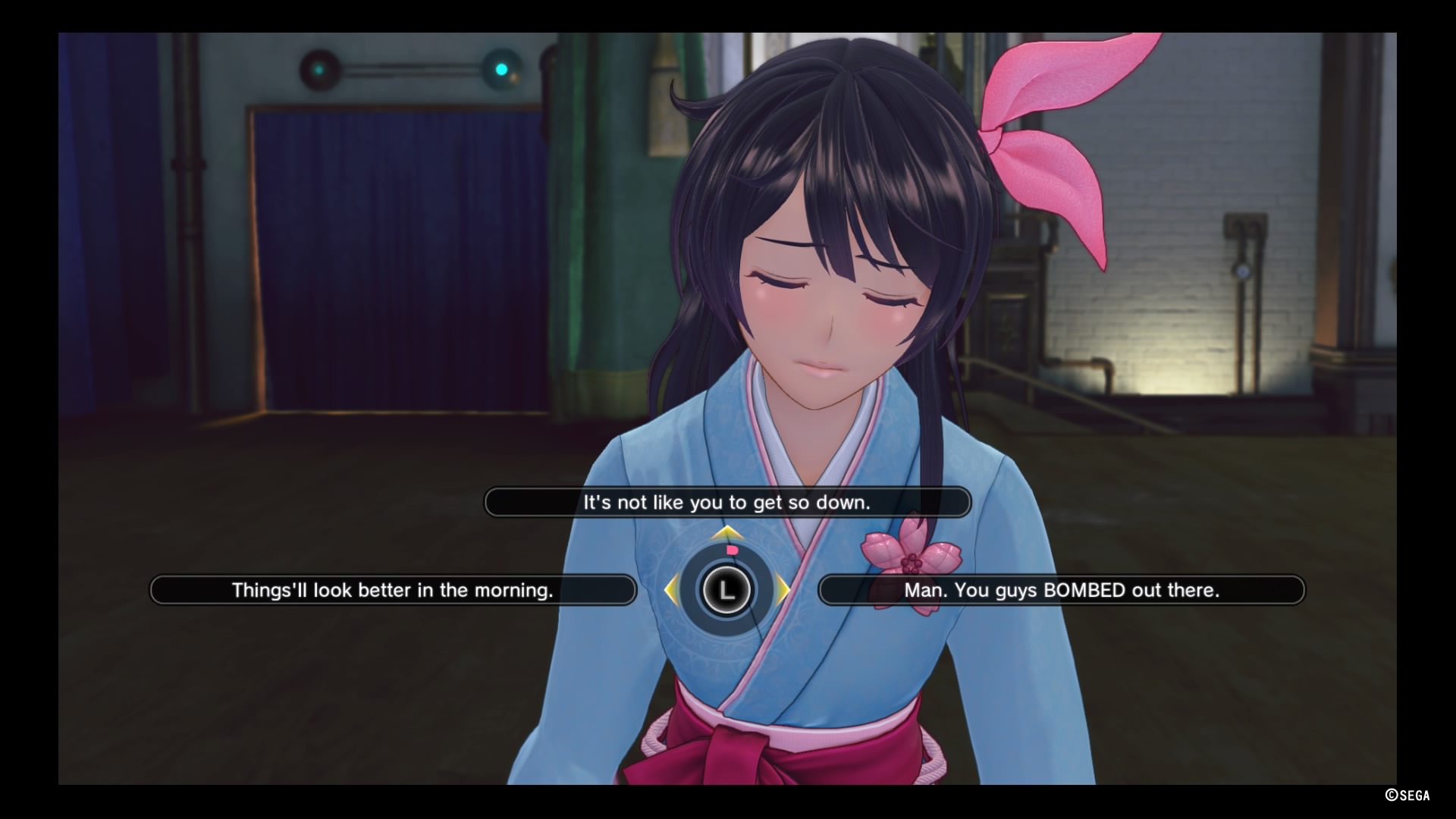 The overwhelming focus of Sakura Wars is building up ambiance, and the game is great at it. A large part of Kamiyama’s life is devoted to getting to know his fellow characters, exploring the theater and surrounding areas, taking on major story-missions or “sidequests” that involve talking to more people and building up more relationships. Animated segments appear throughout, particularly at moments involving theatrical endeavors. There’s fantastic music, complete with image songs, here from the original composer, Kohei Tanaka. The characters also largely look great, though Bleach fans will see some Orihime, Rukia and Rangiku traits coming through from Tite Kubo’s designs.

This means its a good visual novel for people who don’t like visual novels. Yes, I know, people will probably argue it is more of an adventure game. Most of the game has people sending Kamiyama to different areas around the theater to talk to people or run certain errands. While you do have some great 3D spaces to explore and everyone has really gorgeous character models, don’t let that fool you. You are going from one place to another so you can talk to people and make decisions that influence relationships. (Also, maybe you’ll collect some bromide cards with old and new art or play some Koi Koi Wars along the way?) 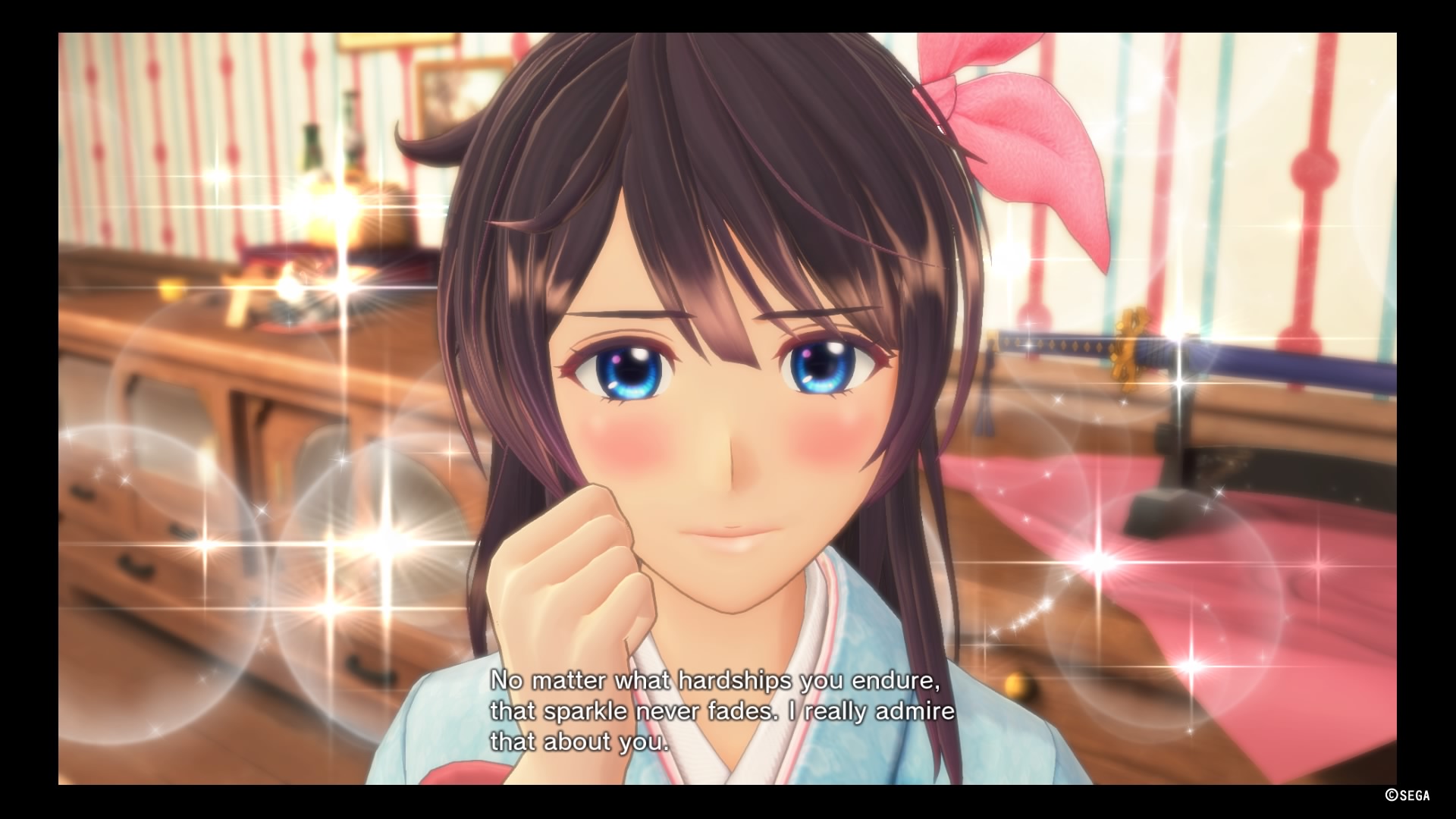 Since this is a Sakura Wars game, that means relationship building. The five Flower Division heroines, Sakura, Hatsuho, Claris, Azami and Anastasia, all have relationship values that can be built up (or worn down) by your responses in different situations. These can involve standard LIPS system interactions that have you picking one of three responses or picking the intensity behind a single response. After making a choice, a brief audio response and the character’s reaction will let you know how much they did or didn’t appreciate your decision. There are also more “romantic” moments where you are in a one-on-one, tete-a-tete session where you’ll actually “touch” the heroine and items in her room for more focused conversations. These can quickly devolve into fanservice, though they can provide occasional moments where you learn more about characters’ mindsets and motivations.

Unfortunately, I’m ready to call its battle system a wash. Like Valkyria Revolution, Sakura Wars is a case of Sega taking what wasn’t broken and “fixing” it. The real sin here is that history has repeated itself. In each case, the company took series known for its strategic gameplay and turned it into a Musou beat’em up. Its basic minions are bland, unexciting and unintelligent opponents that tend to have rather easily telegraphed attacks and only feels genuinely pressing when you have a giant boss to face. Or, well, when you have to try and somehow manage to hit a foe out of the air. 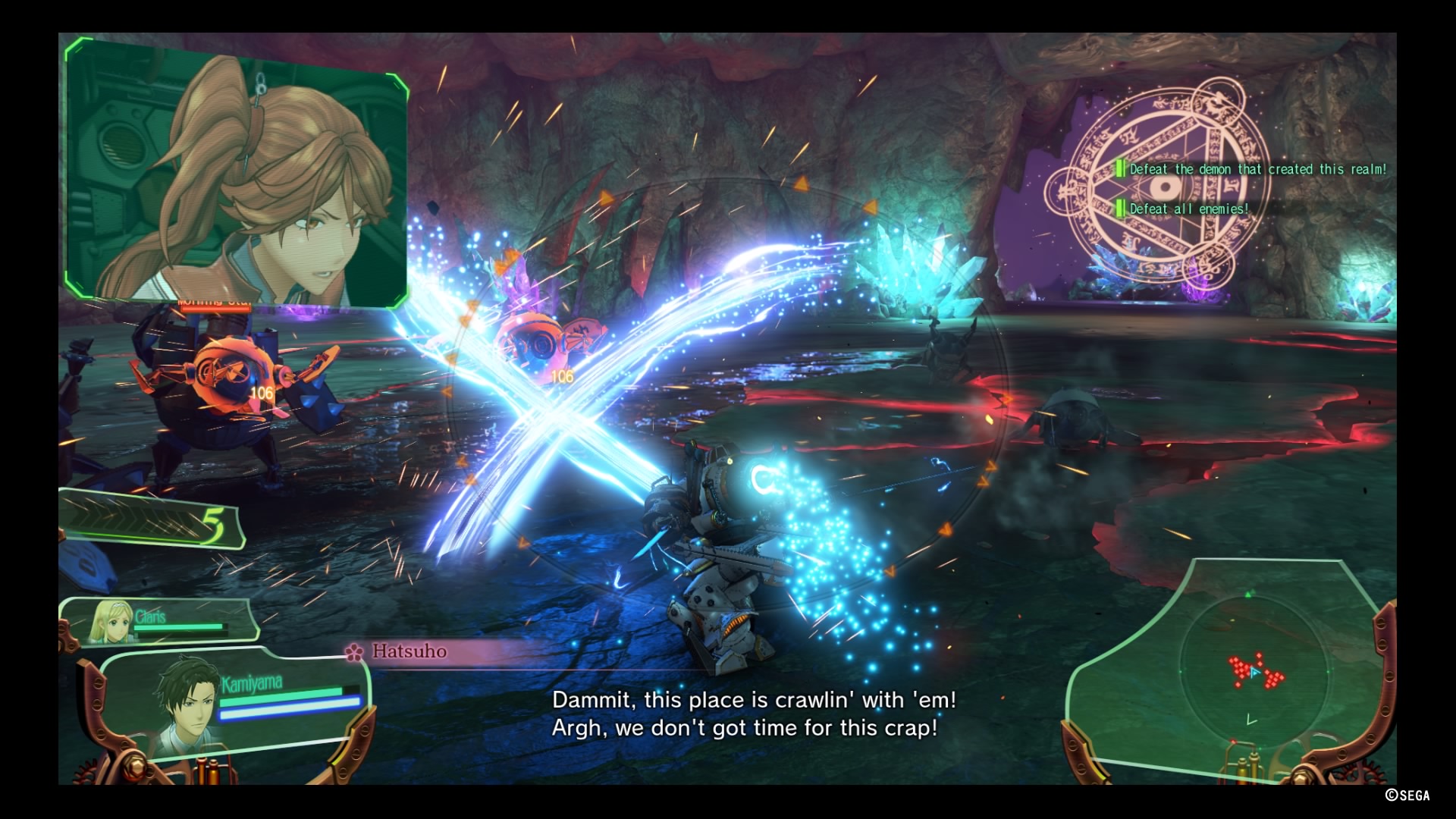 Strategy is usually the least of your worries, which feels like a slap in the face to what Sakura Wars used to be. Things devolve into button mashing the “quick” attack to create a combo, dashing when you see an attack coming, and perhaps pressing triangle if you managed to evade at the right time to trigger a temporary slowdown and critical hit. If the opponent is airborne, then it is about trying to gauge your jump just so you actually can hit them with an attack. With a boss, spamming your special attack or one with a teammate can be enough to swiftly secure a victory. If you’re participating in a Combat Revue World Games match against another country’s “team,” then it is about making sure you go for the targets that are more obviously worth the most points and pressing the circle button fast enough to win for that portion of a competition.

The thing about all of this is that, while the fighting is lackluster and the platforming isn’t great, that doesn’t last very long.

The thing about all of this is that, while the fighting is lackluster and the platforming isn’t great, that doesn’t last very long. It isn’t terribly difficult and doesn’t penalize you in any way and, when you do have a demon realm segment to get through or the Combat Revue World Games, it passes quickly and you’re soon back to the story-heavy elements. Those parts, as I mentioned before, can be genuinely fun and are occasionally accompanied by fantastic music, so it’s fine. 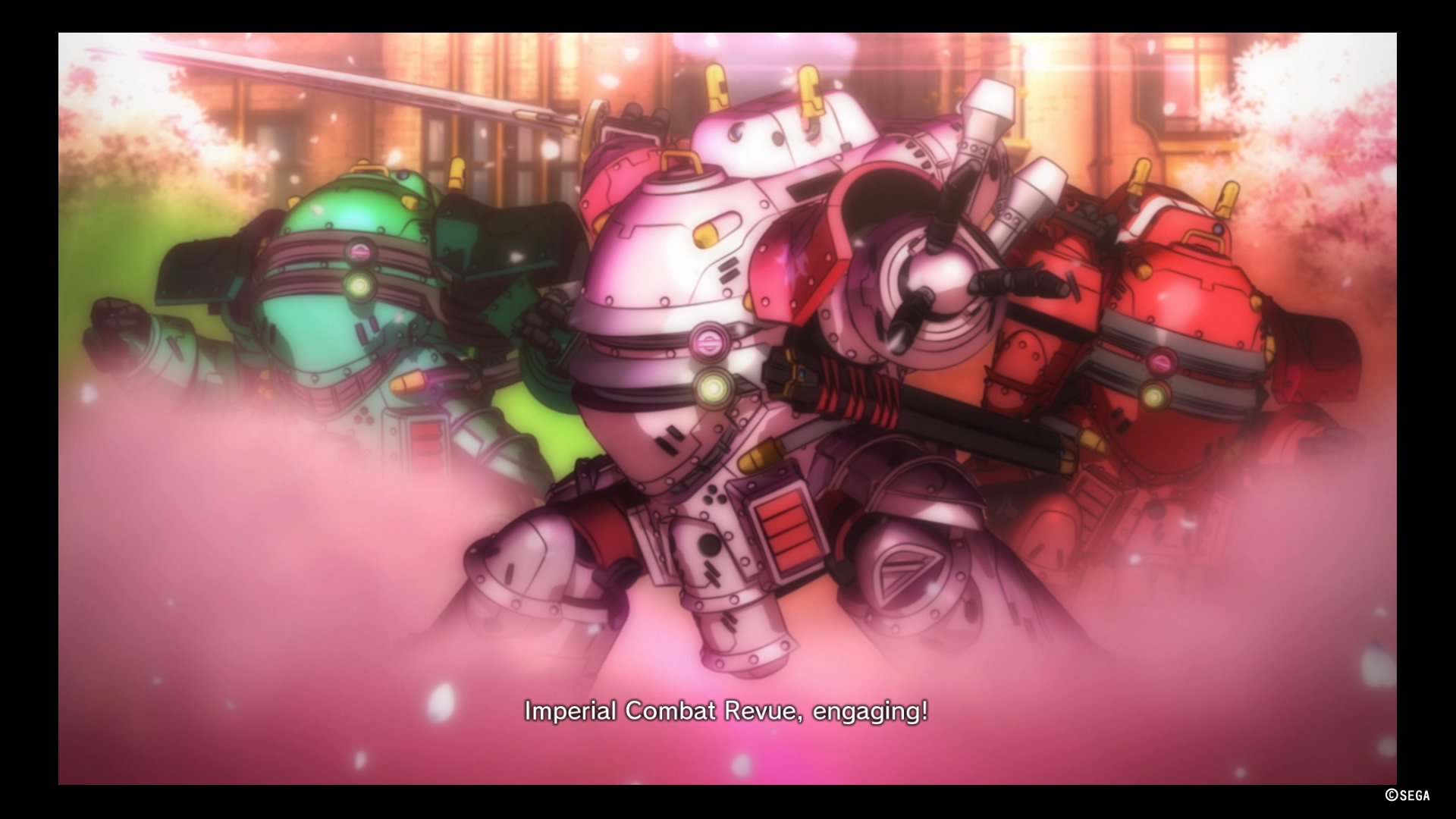 I suppose a good way to put it is that Sakura Wars is a fine, often entertaining game. In many ways, it does pay tribute to the past and embodies certain elements of the series. Certainly, there’s a level of care put into things like character building and the soundtrack. It’s more that the combat is so lackluster compared to everything else here and what past installments had to offer. It’s inoffensive, but hardly striking or memorable, and a series like Sakura Wars deserves “memorable.”

Publisher: Sega
Release Date: April 28, 2020
Developer: Sega
Platform(s): PS4
Questions? Check out our review guide.
A review copy was provided by the publisher or developer for this review.