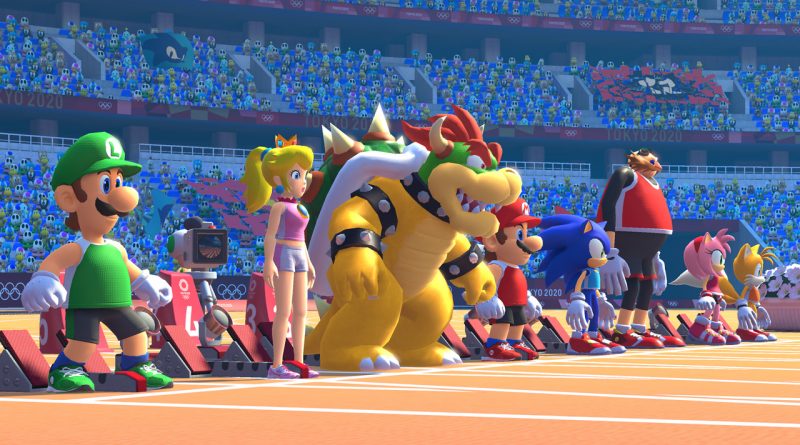 After taking a bit of time off, the Mario & Sonic at the Olympic Games series is back in time for Tokyo, and for a Japanese game, representing itself well for the host country is clearly important. It’s not a good time to phone it in, so it makes sense that this release could draw your eye. How does it manage, given increased expectations? Let’s get into it. 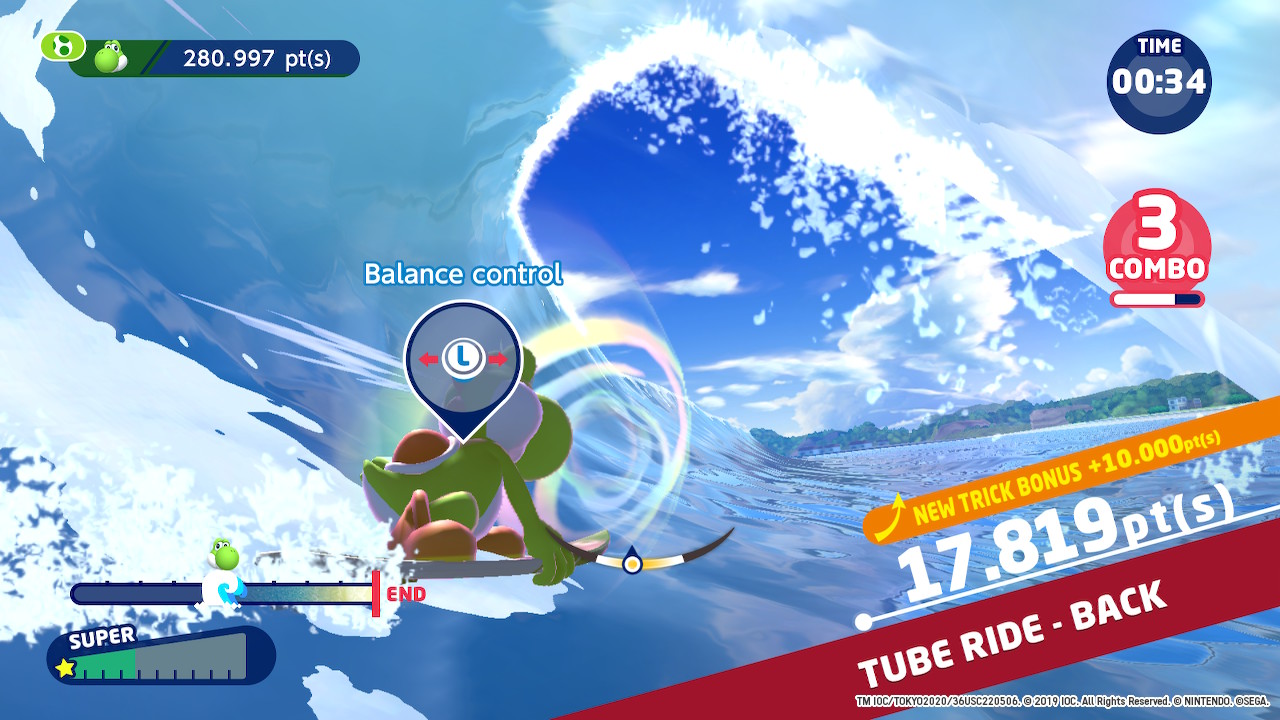 While the focus of the series has shifted from time to time, the core gameplay of the Mario & Sonic series has remained largely consistent: each is a collection of minigames meant to evoke the emotional experience of a particular Olympic event, and the mechanical complexity ranges from simple quick button mashing to something a bit more calculated but still approachable. There are minute-long races of frantic mashing (or waggling), and then there are ones that hover around five minutes like team sports and long solo routines.

Tokyo doesn’t change this, though it does seek to offer a second suite of games with a “retro” pixel aesthetic. These are hampered by a lack of focus, as it seems developers couldn’t decide whether to evoke ’80s Nintendo, ’90s Sega or the last Tokyo Olympics in 1964. Still, they’re meant to be simpler games that evoke arcade action of yore. They’re… actually weirdly a lot like Super Sportmatchen, a multiplayer Switch gem that only does this and does it well, and ultimately that limited scope allows that game to deliver on the concept better than this one. Still, it’s a fun idea. 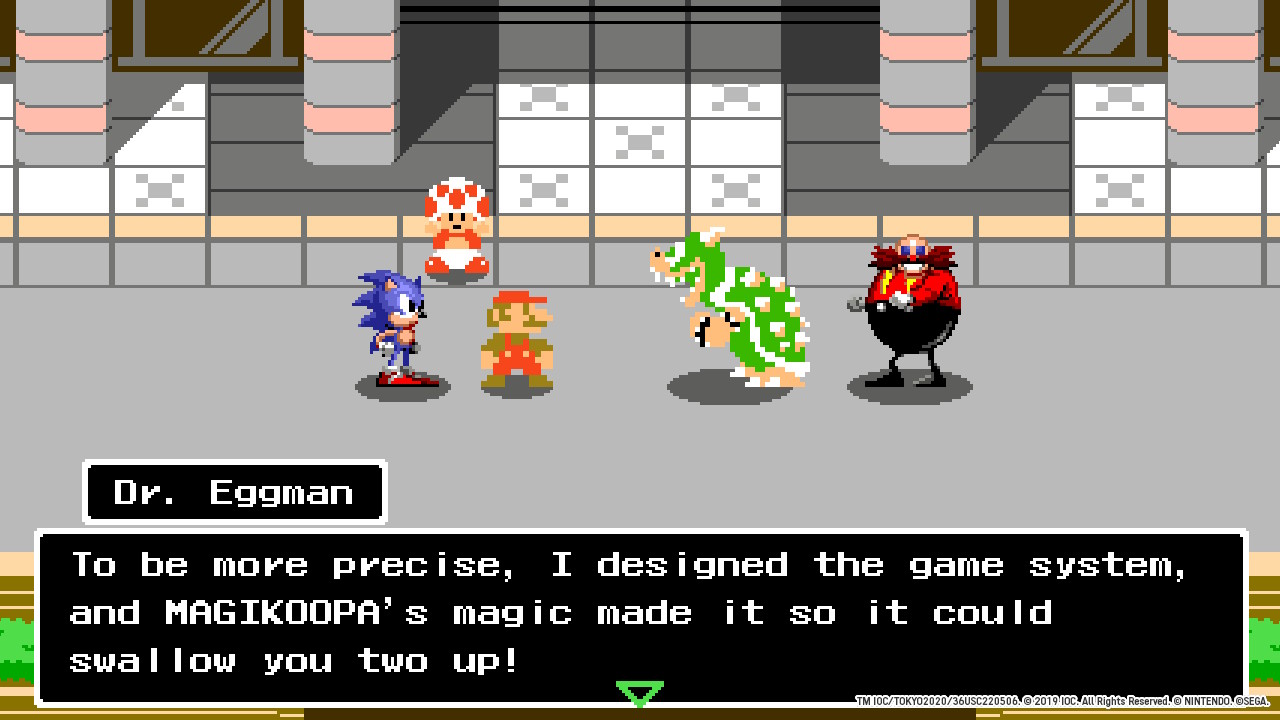 A lot of focus in this installment is on the single-player Story mode, which is definitely a peculiar choice for a minigame collection. In it, you must help characters escape an evil game system through the 2D games and gather support outside of the system through the 3D ones, and… sure. Sure. That’s a plot, we guess. The connective tissue seems to be designed to appease both the International Olympic Committee and the national officials hosting, as both the overworld map and the NPCs in each area seem to only be there to educate you about the history of the Olympics and the grandeur of the athletic facilities. Perhaps this is an edutainment game for small Japanese children? If it is, we were not informed.

A lot of focus in this installment is on the single-player Story mode, which is definitely a peculiar choice for a minigame collection.

The pacing of this mode is really quite slow, as traversing from place to place and talking to people takes longer than it should. This is exacerbated by the already-dismal ratio of time spent getting into a minigame to time spent playing it, which plagues the game as a whole but is especially egregious when you can’t pass the time by talking with friends and family. 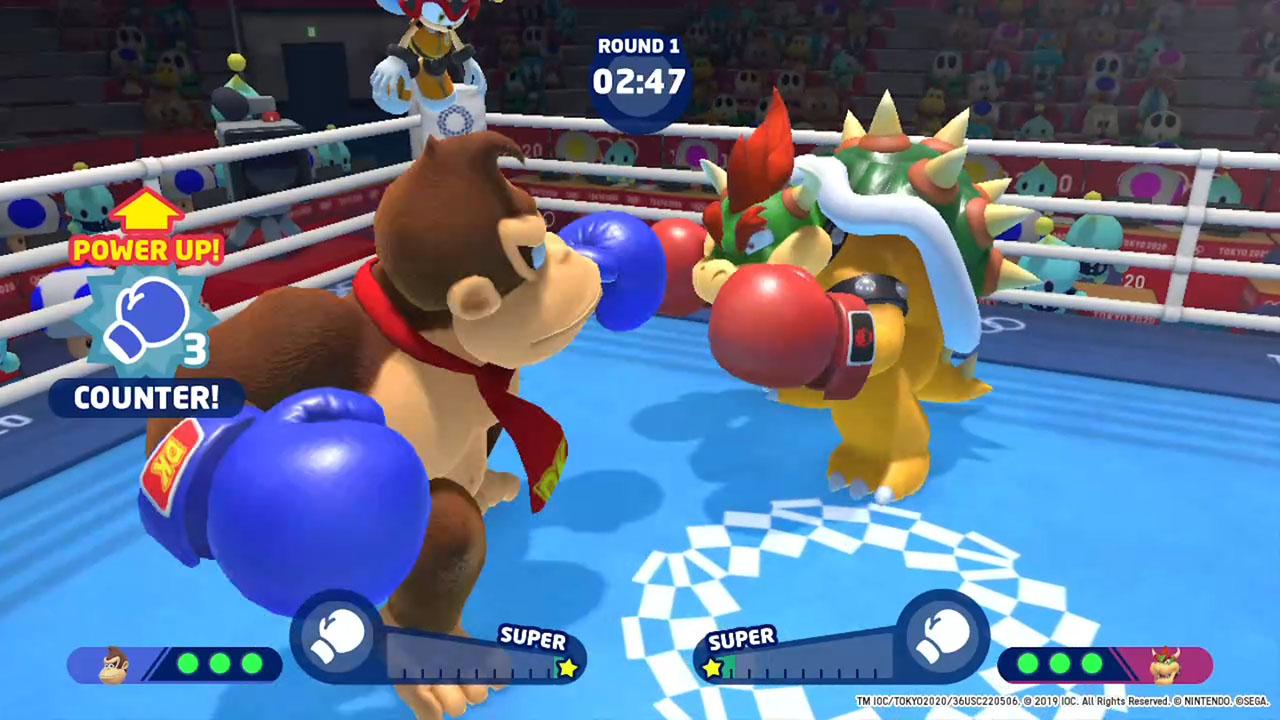 We should dig into that overall time management issue, since it really is what drags the experience down. You’ll generally be selecting an event from the list (or walking to a place in the Story mode), at which point you’re presented with a series of informational screens and significant loads. These screens aren’t usually great at explaining what you’ll need to do, so we found ourselves having to stop when the actual event loads and reading through the controls list to find out what’s actually possible and how to accomplish it. With these extra button presses and how prominent the in-action reminder prompts are, this really shouldn’t be necessary. As it is, it’s inefficient the first time you play and a real time waste every other one.

This gets even worse online, as lobbies and sync times and extra loading sequences for some reason make this even more untenable. We experienced significant lag and interruption for two fairly close people on solid connections, so we’re hesitant to think four-player matchmaking would work as well as Sega wants, but that stuff has a chance to be sorted out through infrastructure. The fundamentals of how the game works are much less likely to see a patch. 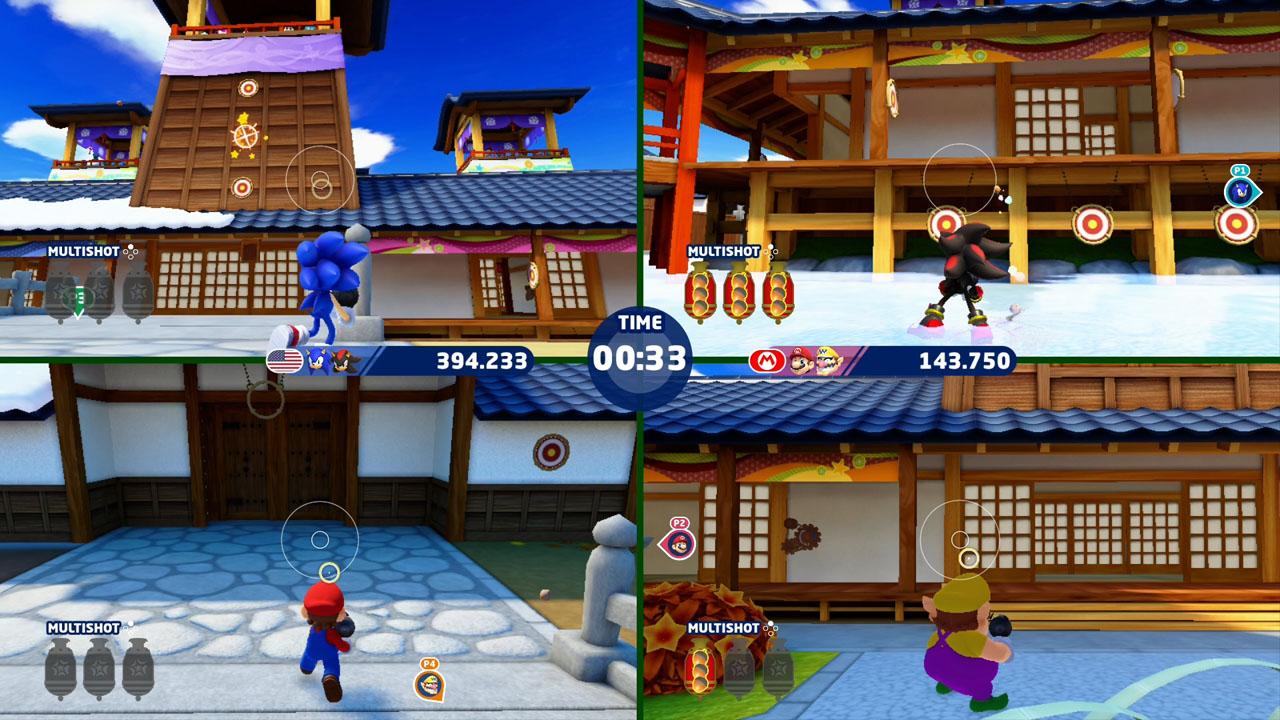 Still, we haven’t touched the real mode you’d care about with a game like this: local multiplayer. This is definitely the way to experience a minigame collection, and past Mario & Sonic games have delivered well on this front. And it’s in this context that some of the included games can deliver a fairly enjoyable time. The team sports, like soccer and rugby, are strong examples and offer variety within the experiences themselves. Also recommended are the run-based ones like skateboarding and surfing. Any of the ones that give you a chance to experience a longer gameplay narrative are above-average here.

Mario & Sonic’s biggest failing is that it provides no sort of overarching structure to hold games together.

It’s a bit of a shame that all the 2D events are two-player only, especially ones like the races that show more competitors on the screen. It means that they’re totally locked out if you have a third player, as there’s no accommodation for playing in pairs or otherwise allowing a play group to remain intact and still try them. The Dream Events are also something of a disappointment this time, as they’re usually the place to make games without the shackles of Olympic accuracy, but the shooting, downhill racing and karate challenges here all end up feeling like sub-par Mario Party minigames. 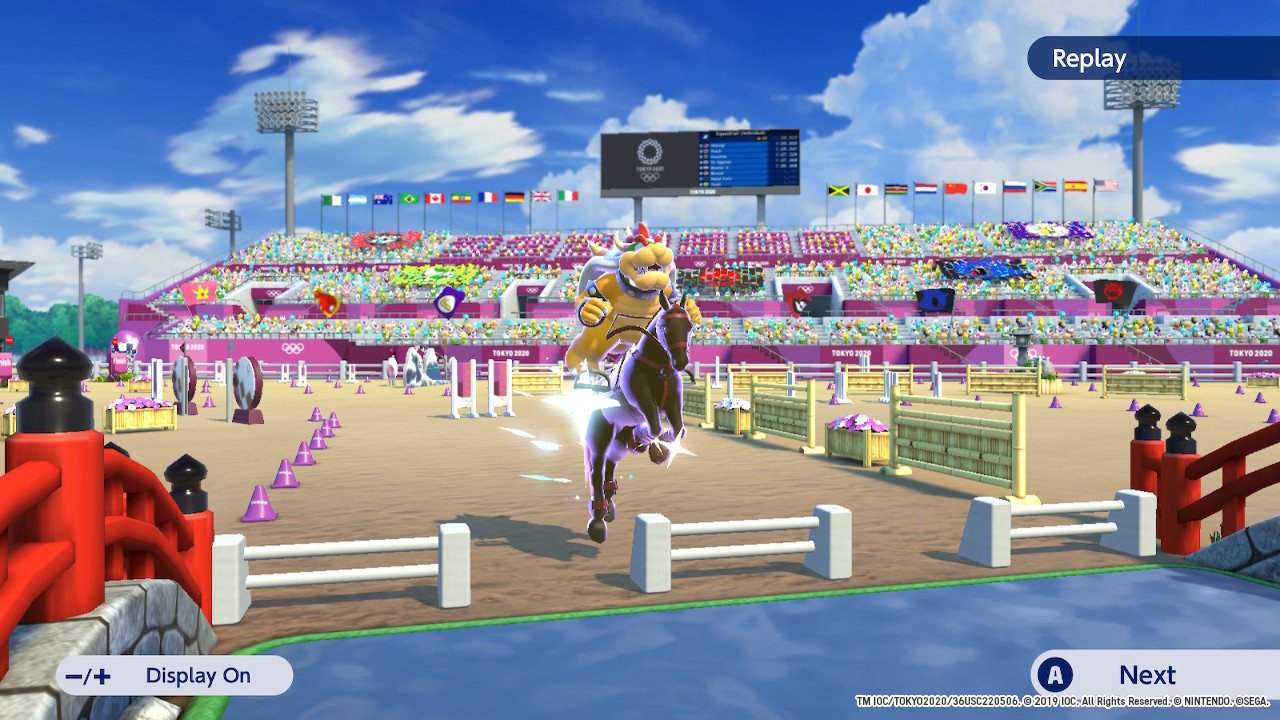 Which brings us to the problem Mario & Sonic games regularly encounter: that each of its experiences is a lesser form of something already out there. Badminton feels like a low-budget Mario Tennis. Soccer doesn’t deliver the fun like Mario Strikers. The Dream Racing event seems to want to evoke Sonic Riders with a sprinkling of Mario Kart on top, but it’s rough when it’s not as fun or deep as either of those.

This isn’t new to minigame collections, though. The appeal of a minigame collection is the sheer variety and convenience of having all of these things at once! Mario & Sonic at the Tokyo 2020 Olympic Games‘ biggest failing, then, is that it provides no sort of overarching structure to hold games together. Mario Party works because it’s held together by the strategy and narrative of a board game, and while Mario & Sonic doesn’t need something that elaborate, it at least needs a way to play multiple games at a rapid pace with an overall score. Something as simple as Super Sportmatchen‘s setup, with consecutive games in a playlist and points for placement, would do wonders. Story Mode and online infrastructure are such large commitments in time and effort, and something as crucial and simple as this not being included is rather bizarre. 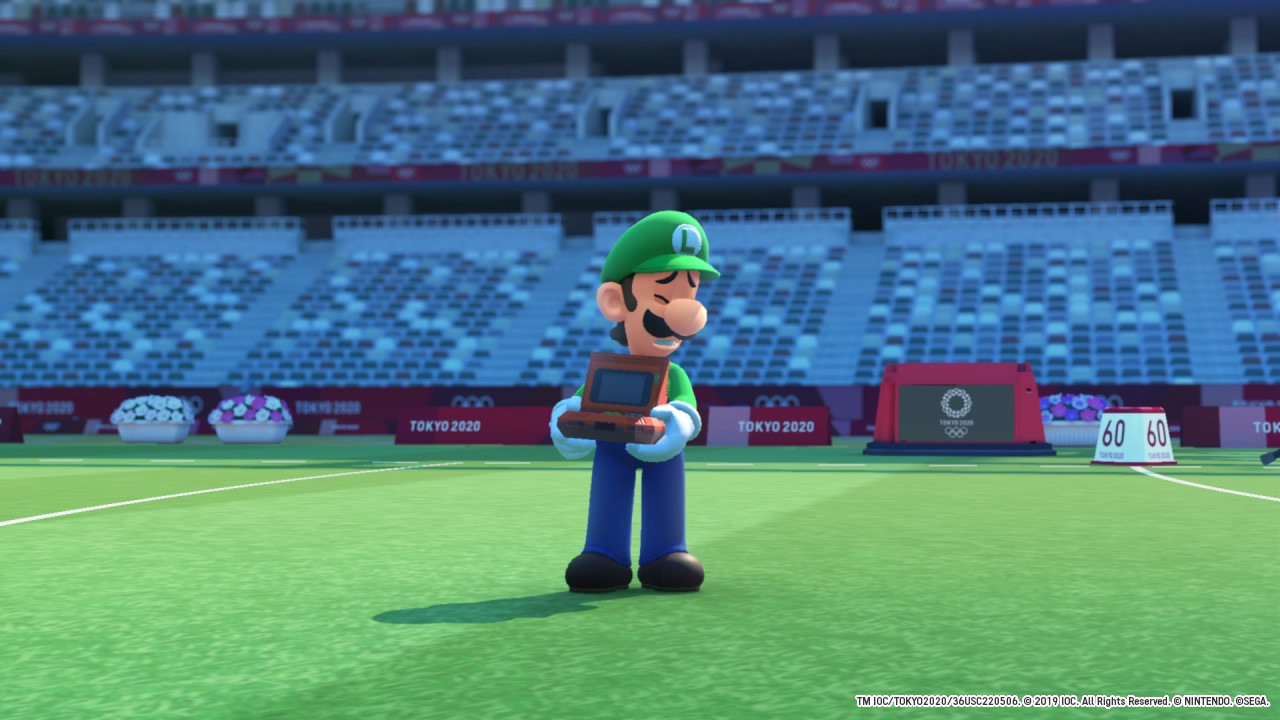 There’s value in the themed whimsy Mario & Sonic provides, and when you actually get into playing this Tokyo 2020 installment, it’s really not that bad. The number of times it gets in its own way is undeniably frustrating, making unforced errors while it focuses on misplaced ambitions. Still, there’s only one game on the Switch that has Bowser compete in equestrian events and Yoshi do sick ollies, and that’s not nothing.

Publisher: Sega
Release Date: November 5, 2019
Developer: Sega
Platform(s): Switch
Questions? Check out our review guide.
A review copy was provided by the publisher or developer for this review.