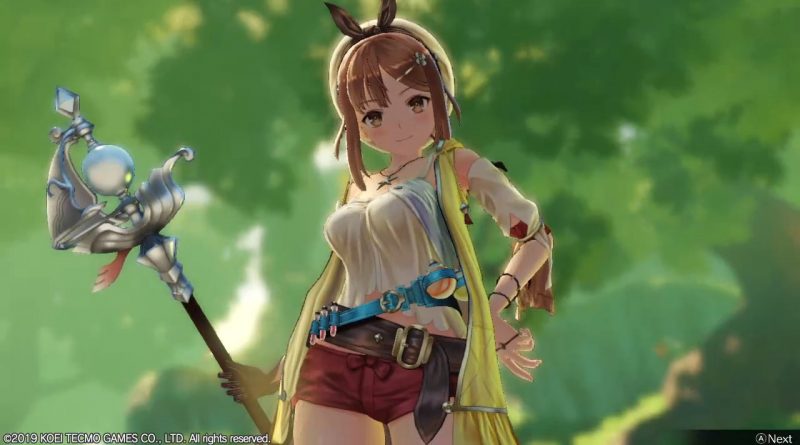 Most of Gust’s Atelier games feel alike. A young woman decides she wants to become an alchemist and goes about honing her skills, proving herself and solving some major problem along the way. Every entry seems to have a priority, be it the exploration elements, item creation, relationships or story, but none of the installments released since Atelier Rorona feel like a step forward. Atelier Ryza: Ever Darkness & the Secret Hideout is a great big jump in almost every way. 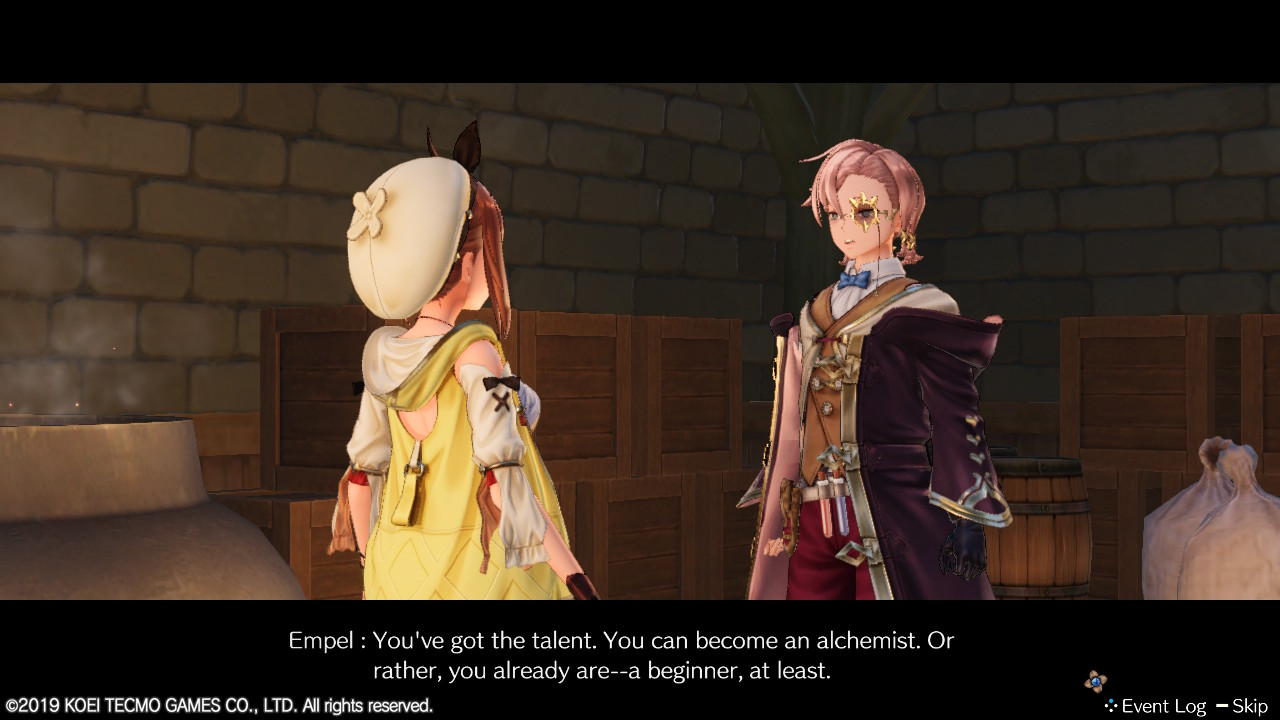 While many games begin with the heroines already having some awareness of alchemy, Atelier Ryza doesn’t. Instead, you might spend your first hour getting to know Ryza and her two childhood friends, Lent and Teo. The three live on an island in a small village called Rasenboden, and each one wants something more. Ryza wants adventure and to be more than just a farmer, like her parents. Lent wants to become a strong warrior. Teo wants to read the ancient books in his family’s library and learn from them. After saving the daughter of a merchant coming to their town to strike up a trade deal, they meet an alchemist named Empel and his warrior friend, Lila, who are investigating the Kurken Island ruins.

While it could feel like other Atelier games would prioritize one gameplay element, Atelier Ryza does everything well.

Suddenly, everyone finds a new direction. Upon seeing Empel use alchemy, Ryza realizes this is the thing she has been searching for; she finally has a goal and someone who will help her learn how to reach it. Likewise, Empel can help Teo learn to read his books and Lila is the kind of fighter Lent aspires to be. This chance meeting gives them an opportunity to come of age and reach their goals, while also going on that one big adventure and making a difference in the world. Though, it does take a bit time for things to really get going, it offers exactly the sort of experience Atelier fans would expect. 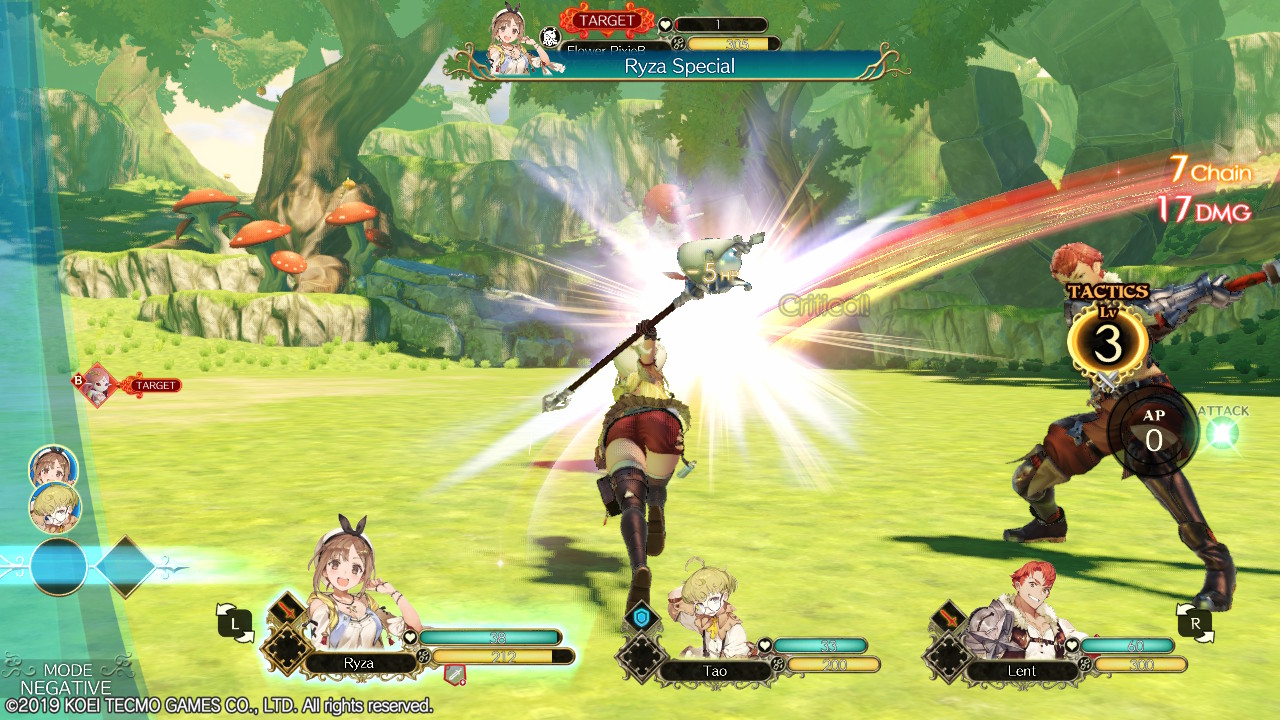 While it could feel like other Atelier games would prioritize one gameplay element, Atelier Ryza does everything well. Battling, gathering, item creation and secret hideout management are all given the same level of attention, so each one feels like an actually enjoyable activity. Take battling, for example. Instead of being a standard turn-based affair, it is now far more active. Two allies join Ryza, and an they fight independently with two different modes that let you determine their attack styles. You can perform quick actions to skip ahead to your turn. The action points you earn for participating can be banked to level up the fight’s tactics level, to determine how many time Ryza or characters could hit, or be expended to use skills. Your weapon can have certain items Ryza has made in it to be used as needed and refreshed, without being used traditionally, and you can restore it outside of a fight. There’s a level of thought here that keeps you from going on autopilot and makes things actually engaging and tactical.

Gathering also makes more sense. As in past games, items that players can take are highlighted. In Atelier Ryza, these potential materials are far more plentiful. You’ll see these highlighted areas everywhere, even around towns and spaces you wouldn’t expect to have bits to use in alchemy, meaning every point becomes interesting. (Not to mention, they look more visually appealing too, with more distinct locations and dynamic lighting.) Leaving a space on a map and immediately returning refreshes them, making it easy to collect what you need once you find a potential source. There are different tools Ryza can make to gather new sorts of items, like an axe, fishing pole and scythe, providing motivation to return to past locations to find new parts. Especially since using a new tool on an old kind of gathering point could provide a different item. It makes you want to spend more time walking about, rather than fast traveling, because there will always be something useful lying around. Though, fast traveling is preferred, as some spaces can feel too big. 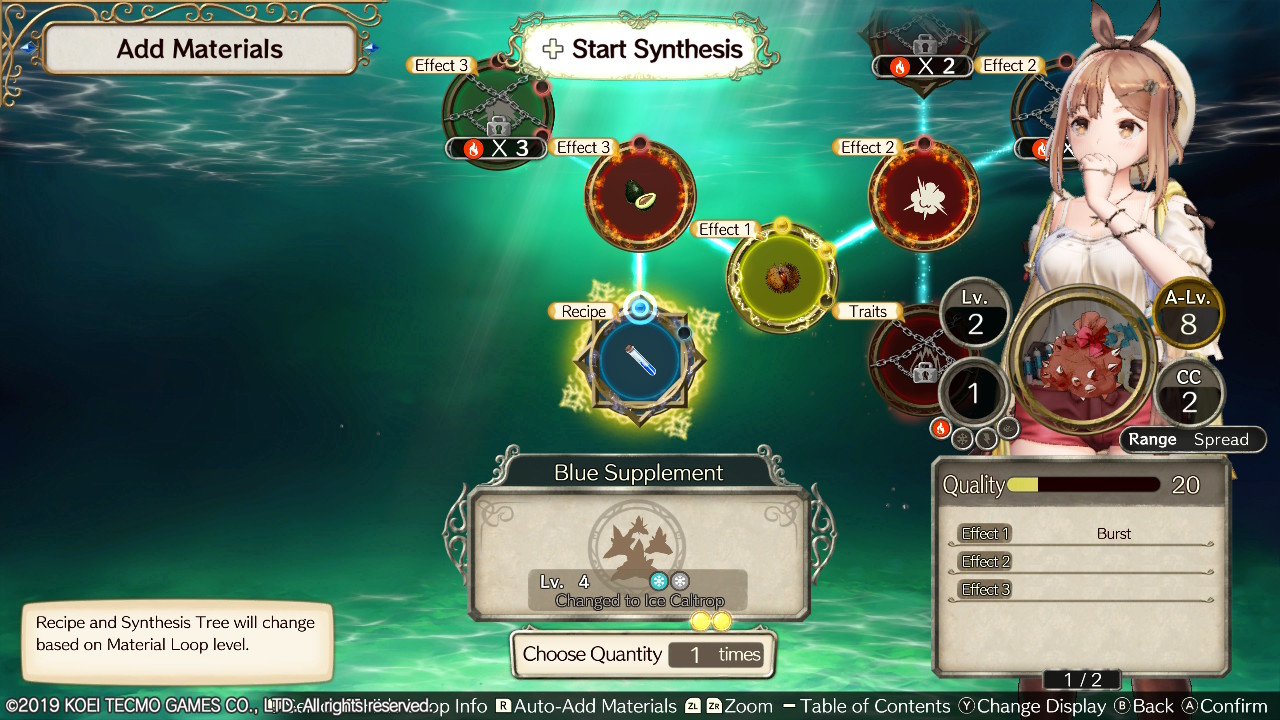 Which is great, because alchemy is so much more enjoyable in Atelier Ryza. In past games, it would often come down to filling the right spaces and following a checklist to get things done. Just like those battle systems, you could go on autopilot. Atelier Ryza’s Linkage System is far more engaging and requires you to actually apply yourself when creating items, as experimenting with parts and filling nodes with items that have the proper properties could unlock entirely new recipes. While there is an autopilot option, where you can push a button and then have the highest or lowest possible quality items inserted to make a thing, paying attention lets Ryza branch out. Instead of stopping by the workshop to quickly make a thing, you are stopping by and really looking at what you can do.

Atelier Ryza’s Linkage System is far more engaging and requires you to actually apply yourself when creating items, as experimenting with parts and filling nodes with items that have the proper properties could unlock entirely new recipes.

You could still get recipes from books, chests or quests, but most of the new items come from applying effort. By looking at requirements for nodes, you could apply the right sorts of elements to unlock a new item. Which, in turn, could have its own new recipes. Not to mention you can also rebuild items to make them even stronger, making battles easier. It’s so much more thoughtful. You have a chance to investigate these cell branches and play around with filling each one. 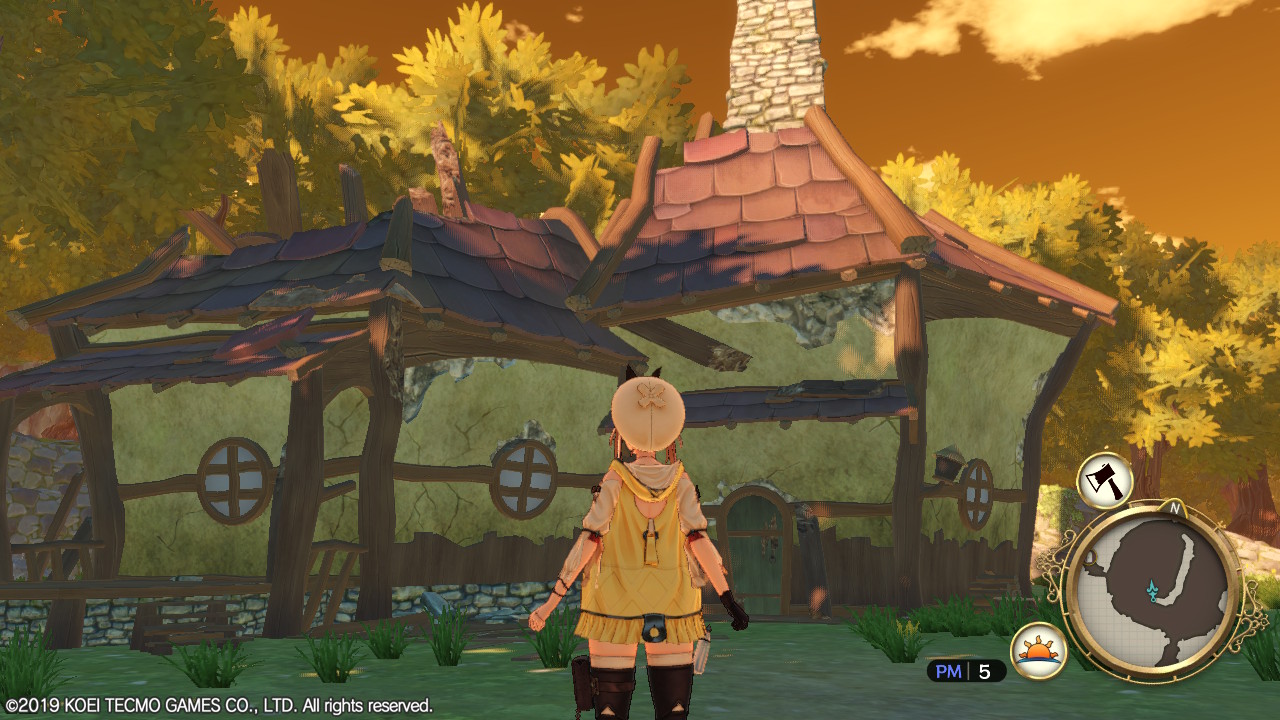 Then, there’s hideout management. Ryza and her group have a base of operations that can be customized. Think of it as injecting a little Animal Crossing into Atelier. Except here, how your atelier looks will influence your party. If you have the right look set up, you’ll create combos that could cause stat boosts to party members or make the group stronger during certain conditions. This isn’t an entirely new feature, as Atelier Firis had atelier making elements that would let you alter the furniture to boost things like your container size. But now, you can change the furnishings and whole look of the building, letting you go for appearances or practicality.

But, while Atelier Ryza does do a lot of things really well, there are some areas where it is lacking. It looks better than most recent installments, with really gorgeous environments and characters who don’t look like they could easily fit in any installment from Atelier Rorona to Atelier Lydie & Suelle. But, it can feel like there’s wasted space, making running around tedious. Especially since you can’t bring up a fast travel menu to warp anywhere. You have to find a bulletin board instead. (Though, you can press a button to warp home any time.) Also, while there is some good character development for everyone, there are no traditional character-specific quests. Part of the fun of Atelier entries is seeing how the protagonist interacts with allies, and a lack of character quests or specific endings tied to them is disheartening. (Especially since there’s only one ending total.) Also, if you liked limits and constraints, those are gone. There’s no time limit, like in Atelier Rorona or Ayesha, where you feel pressure, which could be seen as a pro or con depending on your preferences. 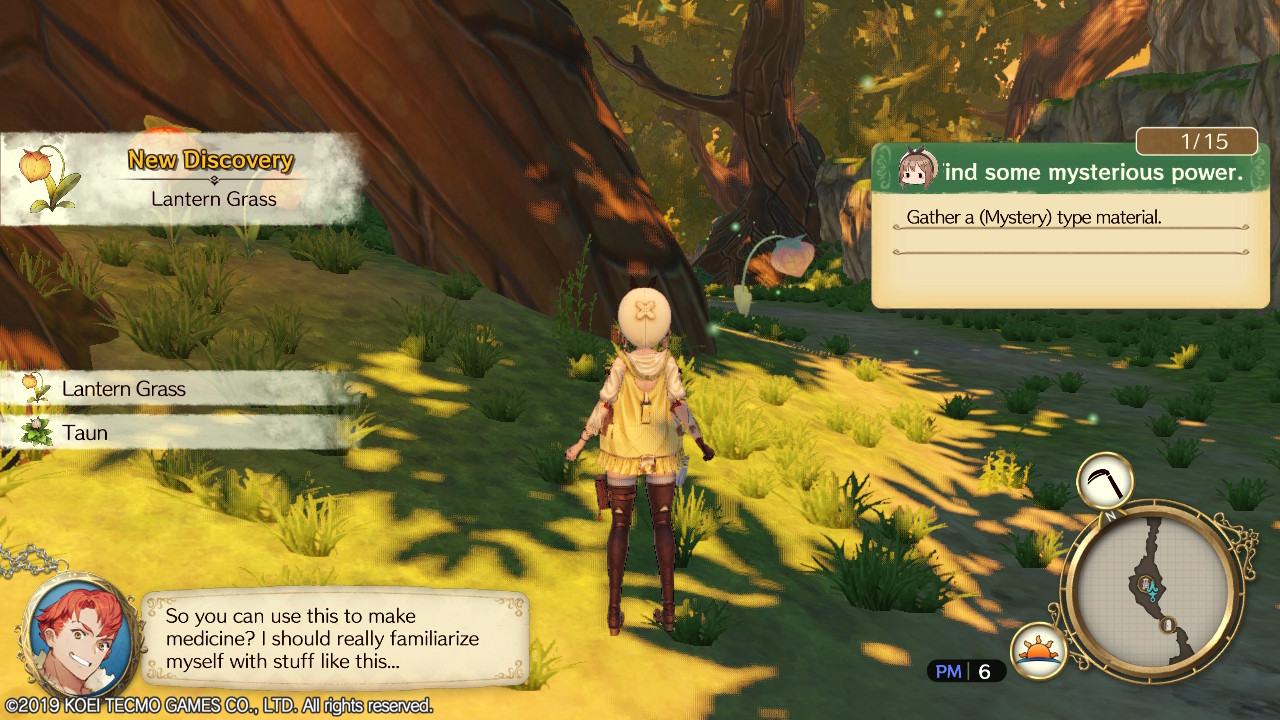 Atelier Ryza: Ever Darkness & the Secret Hideout feels like we’re not just seeing Ryza head out on a whole new adventure, but the Atelier series as a whole. The new directions for the battle system and item synthesis are both very much appreciated and liven up features that, after the Arland, Dusk and Mysterious series, were starting to get a little stagnant. Getting to customize a base is fun, especially since you could try and make it functional or pretty. It is missing some staples, like relationships developing between characters and multiple endings. Still, it does a lot well and it is lovely to see an Atelier installment experiment.