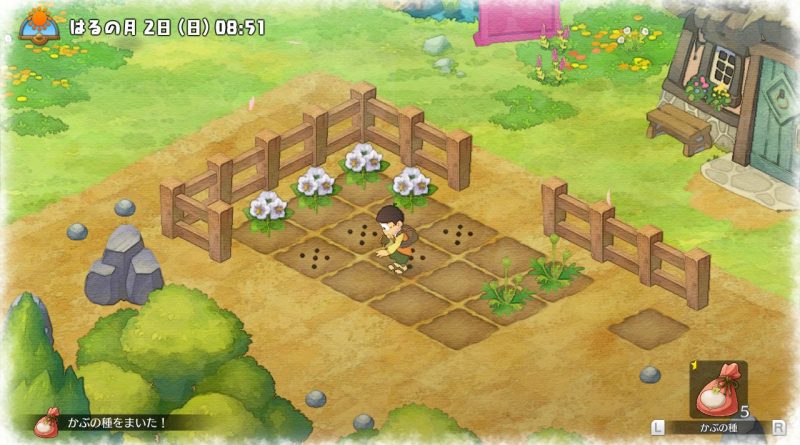 Story of Seasons, more often than not, allow you to tell your own stories. While each town will have some sort of backstory and premise, players can self-insert themselves into roles as new farmers and community members. But occasionally, this formula is played with via crossovers. Doraemon: Story of Seasons is one of those times. A more predetermined path is at play, even though people still have the freedom to farm however they’d like, and the demo helps show how this process works in action.

The Doraemon: Story of Seasons demo begins by glossing over everything that got people to that point, in favor of getting people to the farming portion a little more quickly. However, the summary is both in keeping with the Doraemon flavor and Story of Seasons motif. Nobita found an unusual seed and planted it. Upon caring for it, it turned into an unusually large and obviously magical one. Noby, Doraemon, Gian and Shizuka found themselves pulled into another land, with Doraemon pulling gadgets to possibly help out of his fourth-dimensional pocket to no avail. The group lands in a pastoral area called Shizen Town without the tools the robot cat usually uses to help save the day. So, the group decides to aid the community and farm while waiting for a way to get home. 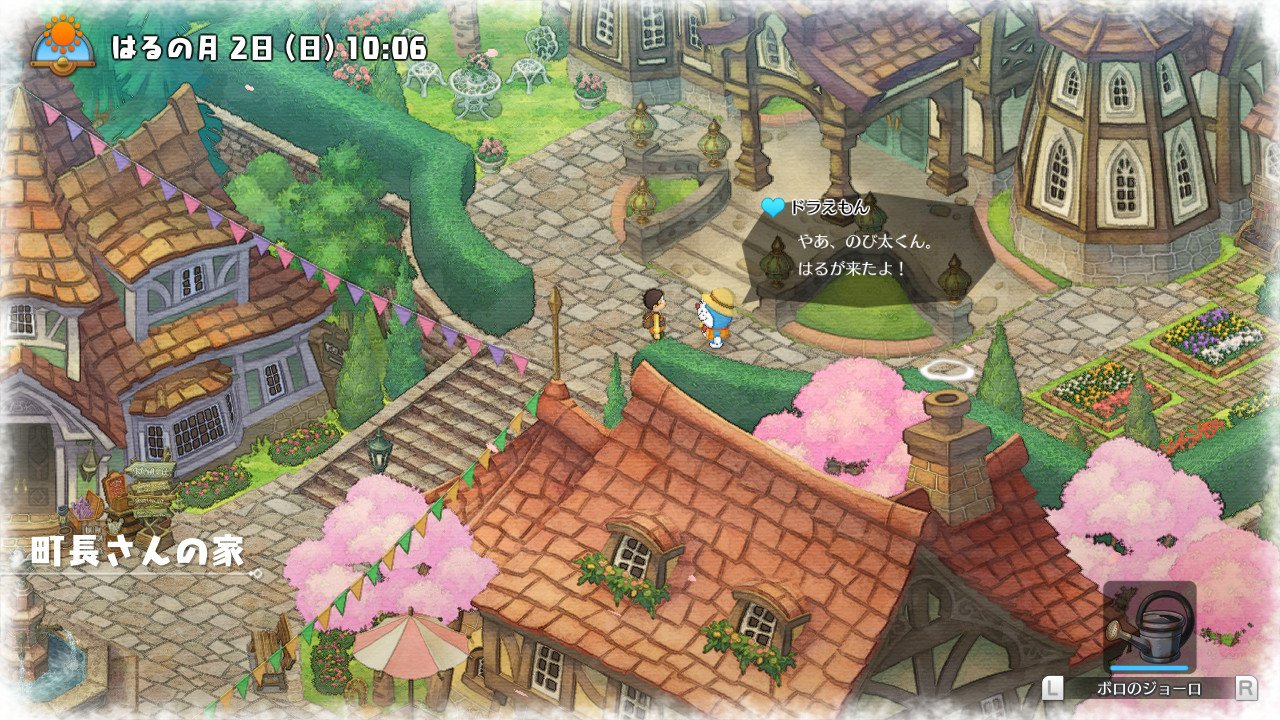 From here, the demo essentially shows how Doraemon: Story of Seasons acts like any other game. Players control Noby and go through the motions of learning to farm from Lunch, a citizen of Shizen Town who offered them a place to live. You till soil, plant seeds, water, fertilize, harvest and ship crops. Then, satisfied that Noby knows how to handle basic tasks, give items as presents and feed himself, Lunch sets him loose on a field that needs tending. Shortly after, well, you’re given a chance to just live life as Noby in Shizen Town.

This means you get to see two elements from the Doraemon series that translate well to Doraemon: Story of Seasons. The first is the Anywhere Door. This is a gadget that has been in the anime series, manga volumes and movies. If someone goes to this door, then they can instantly teleport to another area. While you can roam around Shizen Town, each major area has Doraemon’s Anywhere Door in it to act as a fast travel mechanic. When you have Noby turn its handle, you see an overview of the entire area, complete with images of who is at each location. It can help you make an informed decision about where you may want to go next, as well as get somewhere immediately without wasting time running around. Fast travel isn’t new to the series. Games like Harvest Moon: Animal Parade allowed you to use things like a whistle to quickly move between places. Just here, we have access very early on. 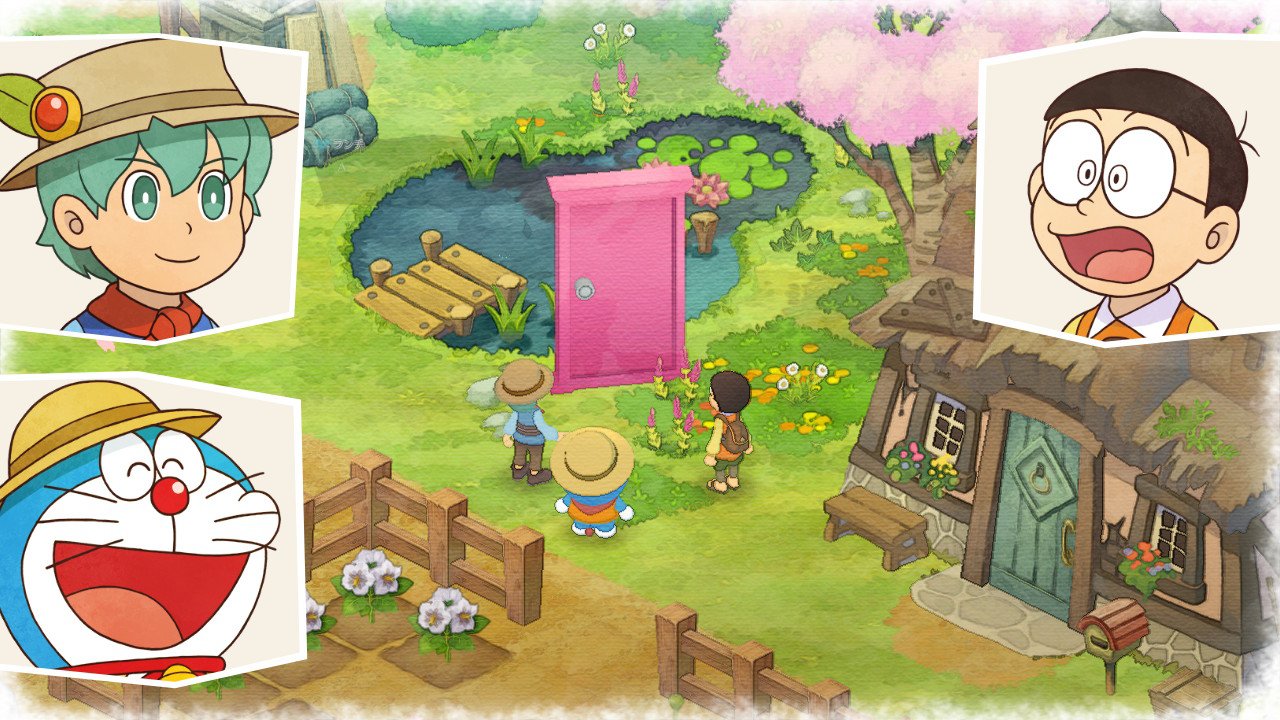 Wasting time is another mechanic. In Doraemon, Noby is an incredibly lazy kid. In the original series, he is always napping or sleeping in. In Doraemon: Story of Seasons, you can use this to your advantage. Noby can sleep anywhere by pressing the B button. Once you do that, you can select how long you would like him to sleep. This can help ensure you are in the right position at the right time or fast forward to a time when you might need to do something.

Doraemon: Story of Seasons is the sort of game that might end up feeling like more of an introductory experience. We will have a Story of Seasons title that doesn’t seem too harried or concerned about profits. Instead, it is about trying to return home after an incident gone wrong. Doraemon’s gadgets will be there to help, with his Anywhere Door right away giving people an edge when exploring a rather large town. One of Noby’s greatest character flaws might even prove helpful, since it will let you take a break and advance time to a point you might desire most. It could be one where you get to spend more time picking and choosing what you want to do and when.

Doraemon: Story of Season is immediately available in Japan and will come to other regions in 2019.