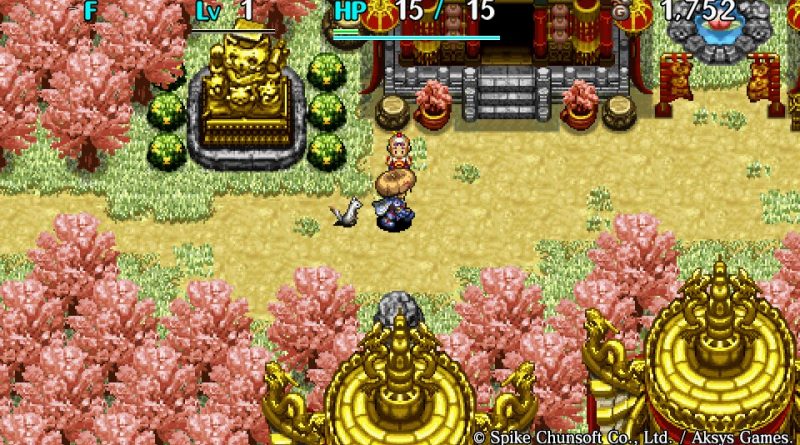 With Pokémon Super Mystery Dungeon out on the Nintendo 3DS last year and Shiren the Wanderer: The Tower of Fortune and the Dice of Fate gracing Vitas two weeks ago, you may have developed a taste for tough-as-nails dungeon-crawlers. Roguelikes are on the rise. But then, when it comes to these Spike Chunsoft joints, they always have been. We just haven’t had as much of an opportunity to enjoy the series in the west.

Yes, series. While Pokémon Mystery Dungeon and Shiren the Wanderer may bear different monikers, they’re part of one big happy family. Think of them as branches on branches of a tree that began with Torneko’s Great Adventure: Mystery Dungeon on the Super Famicom in 1993. 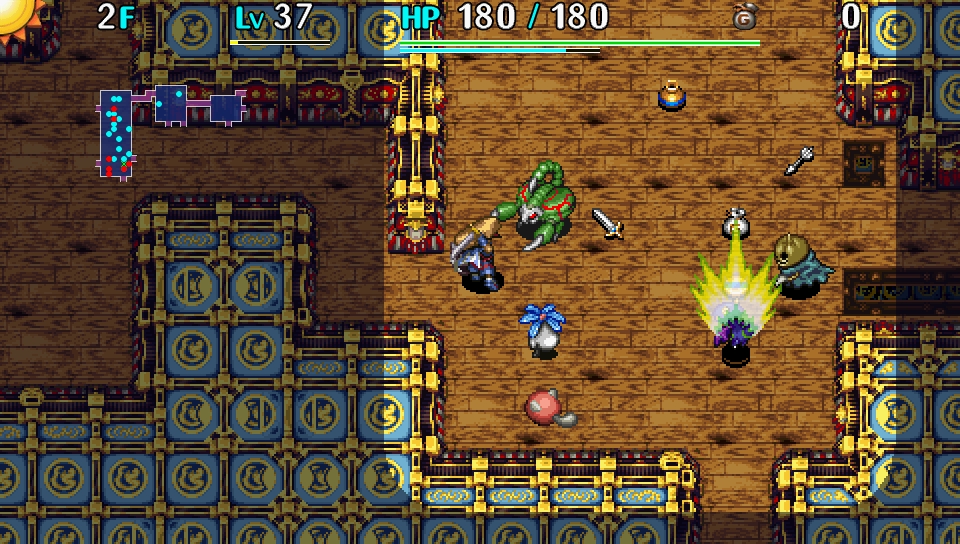 Mention “Mystery Dungeon” and Shiren the Wanderer is the series that will probably come to most people’s minds. While not the first installment, it is the one to give the series a unique identity and set it apart. While Chunsoft leaned on Dragon Quest for the first endeavor, it introduced us to a wandering ronin named Shiren and his weasel partner, Koppa, for more original outing.

The Shiren the Wanderer installments are the one that will break people. These are tried and true roguelikes. The dungeons are randomized, so they’re different each time you enter. Shiren’s level resets the second he leaves one, so you start from scratch each time. Health is restored as you walk, so long as he’s exploring on a full stomach. Should he start starving, health will decrease with each step. Allies may join him on his journey, but there’s no guarantee they’ll be huge helps. If a partner falls in a dungeon, you’ll have to expend a healing item to resurrect them. If Shiren falls in a dungeon, you lose everything he has on hand; this includes cash and items. Saving valuables in banks and warehouses after each successful run is critical.

What’s special about Shiren the Wanderer is the attention paid to the setting. These games take place in feudal Japan and have an emphasis on folklore and fairytales. In the Wii’s installment, Shiren is going through the Karakuri Mansion, searching for a princess supposedly sleeping inside for hundreds of years. (Just like Sleeping Beauty!) The Tower of Fortune and the Dice of Fate has him searching for a means of changing a young woman’s fatal destiny. Yokai beset some villages, though sometimes they can prove to be helpful allies in the form of shop-owning tanuki or kitsune women who might aid Shiren in battle. He’ll visit ruins, temples and villages that very much keep with the period, while also offering a more fantastic take on traditional Japanese locations.

Regrettably, only three of the nine Shiren the Wanderer games have been released outside of Japan. Two of which have since become somewhat rare. Shiren the Wanderer: The Tower of Fortune and the Dice of Fate is quite easy to find at the moment, which is great, but its online services ended in December 2019. 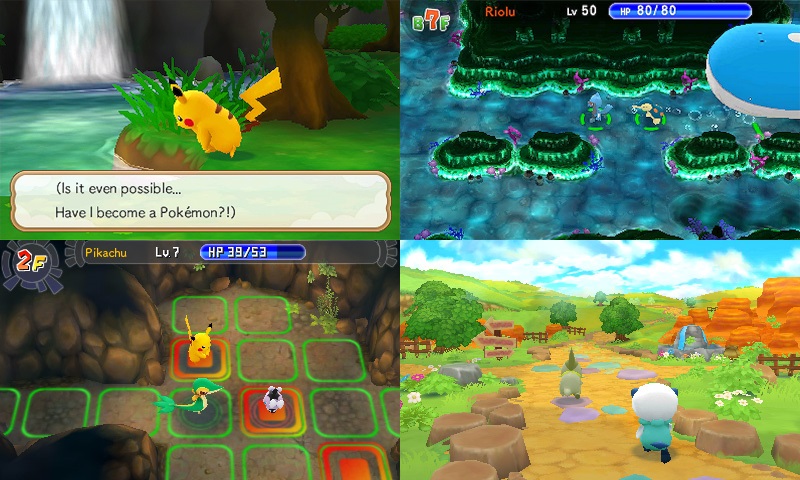 The Pokémon Mystery Dungeon games are the youthful, friendly faces in the Mystery Dungeon line. Partially because the first installments didn’t appear until 2005, when Blue Rescue Team and Red Rescue Team were released on the Game Boy Advance and DS in Japan. Also, they’re the easiest Mystery Dungeon games you’ll encounter. They’re cute, accommodating and go out of their way to make the experience more palatable for people who might not have the patience for a more grueling endeavor.

Each one begins with a person being transformed into a Pokémon, with the new identity occasionally determined by a personality test. Immediately after discovering your predicament, you befriend a partner Pokémon. This ally, as well as others joining you throughout the adventure, will act as non-playable companions in dungeons, helping you battle enemy Pokémon.

In addition to finding a way back to their original forms, the heroes must find their way to rescue Pokémon from dungeons in more minor rescues and resolving a greater problem that saves the entire Pokémon world. While decidedly solo adventures, wireless and StreetPass functions allow people to request or perform rescues. Basically, the games give you plenty of excuses to keep journeying into dungeons in search of new Pokémon.

In years where two installments were released, there would be version-exclusive Pokémon in each game. People who wanted characters from the opposite game would need to trade Wonder Mail passcodes to unlock the extra characters in their own games. This practice ended with the 3DS installments. Coincidentally, the 3DS entries are the first available worldwide that don’t determine your Pokémon identity with a quiz.

The series will be experiencing a revival in 2020! On March 6, 2020, the original pair will reappear as Pokémon Mystery Dungeon: Rescue Team DX for the Nintendo Switch. It has a new graphical direction, where all of the characters and environments look as though they were drawn by hand, the whole experience is contained in one game and mechanics from entries like Super Mystery Dungeon. It even has a demo that lets people sample the roguelike experience.

Here is a list of all of the Pokémon Mystery Dungeon games you could easily play in 2020. Thanks to the digital age, it’s possible to easily access each portable installment. 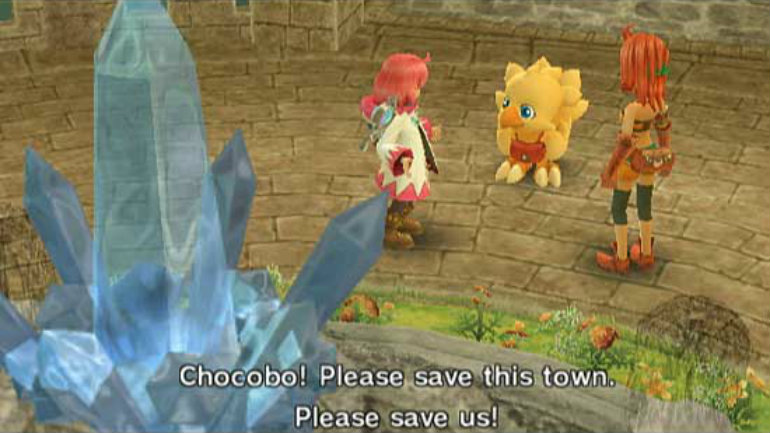 While it is rather easy to divide up Mystery Dungeon games into “ones that star Shiren” and “ones that star Pokémon,” it really isn’t that easy. Spike Chunsoft has released a number of installments that act as spin-offs for other series. Even more surprising, some of these have found their way outside of Japan when Shiren didn’t!

Next time you go to your favorite independent game store or website, you may want to keep an eye out for these games. They offer their own takes on the formula established in other series, allowing you the opportunity to explore mysterious dungeons with more familiar faces.

The Chocobo in this roguelike is accompanied by a Mog and delves into dungeons, searching for treasure. It’s this pursuit that leads to the duo being separated, encountering a friendly human named Shirma and causing a dungeon to sink by interfering with its crystal.

It’s a traditional affair, with Chocobo equipping claws and saddles in place of weapons or armor. His allies each have unique abilities attributed to them that tie-in with Final Fantasy jobs, as Mog is a thief, Shirma is a white mage and Cid is a machinist. As a bonus, a second player could join in and play as the partner character!

Another treasure-hunting tale, Chocobo and Cid go searching for treasure and find themselves in the town of Lostime, where everyone loses their memories each time the clock tower’s bell rings. It’s up to Chocobo to enter roguelike dungeons, with the help of a boy named Raffaello who can send him into the Labyrinth of Memories.

While you’re going it alone, Chocobo can take on 10 jobs inspired by the Final Fantasy series, using learned abilities to perform special skills that can attack, heal or offer buffs and debuffs. It offers an opportunity to strategize and influence encounters, while still making you feel like the fate of the town rests on your shoulders.

Originally, Final Fantasy Fables: Chocobo’s Dungeon appeared on the DS in Japan and the Wii worldwide. In 2019, it reappeared on the PS4 and Switch as Chocobo’s Mystery Dungeon: Every Buddy!. The remaster added the ability to recruit and take an ally or monster into a dungeon with you. There’s even local multiplayer!

The Nightmare of Druaga: Fushigi no Dungeon (PS2)

The Nightmare of Druaga is a spin-off in The Tower of Druaga series inspired by Babylonian mythology. It follows Gil (Gilgamesh) as he attempts to rescue Ki, a priestess of Ishtar and his fiancé, from Skulld, a sorceress who has taken her. Gil must rise through the Tower of Druaga to save her, as well as explore side-dungeons to aid people in town.

It offered some twists to the typical Mystery Dungeon formula. Gil’s equipment adjusts his range and speed, meaning you have to think more critically about what you equip. You also need to keep some items to offer as sacrifices to Ishtar, as your field of vision increases and decreases depending on how much you have offered to the goddess.

With Etrian Mystery Dungeon, roguelikes take a more customizable approach. You’re heading into mystery dungeons on the outskirts of a town called Aslarga, hoping members of the adventurers’ guild can set up fortresses and hold back monsters, especially the stronger than usual D.O.E.s (based on Etrian Odyssey’s F.O.E.s).

While the basic dungeon-crawling is akin to previous Mystery Dungeon, this entry is unique in that you completely customize your party of adventurers. There are 10 different classes to choose from, including a Wanderer based by Shiren, and each one has his or her own special abilities. Picking the right party, as well as building up a dungeon’s fortresses to hold back D.O.E.s and add buffs to your characters, are essential keys to surviving and saving the town.

We may not have received each roguelike created by Chunsoft, and later Spike Chunsoft, but we’re hardly hurting for Mystery Dungeon games. Once you develop an appreciation for this occasionally sadistic series, you’ll find a more than adequate array of titles to enjoy.