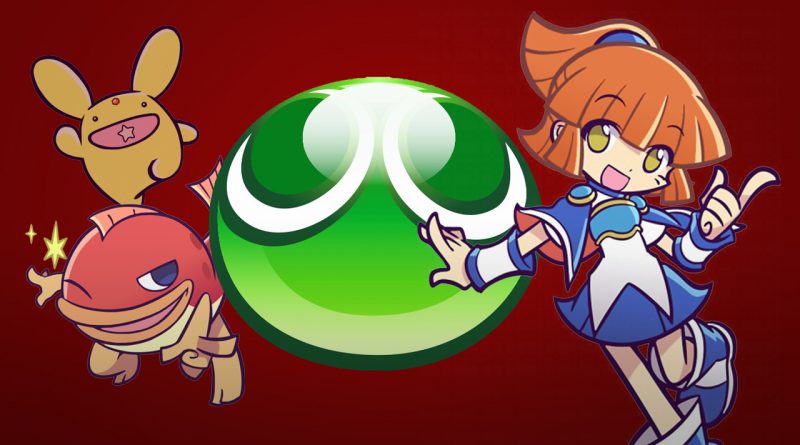 So you want to get into a venerable, classic puzzle series, but don’t know where should you start? We’re here to help! Here’s a new player’s guide to the Puyo Puyo franchise as a whole.

2017, PS4/Switch/PC (Sonic Team)
Also available import-only on Wii U, PS3, Xbox One, 3DS, Vita
Usually we like to list a few options for entry points for a series, but… nope, this is the one. This is what you need. The finally-released-in-the-West mashup game allows you to play pure Puyo as well, and has the biggest feature set for anything widely available. Also there’s Tetris, which is a solid bonus. 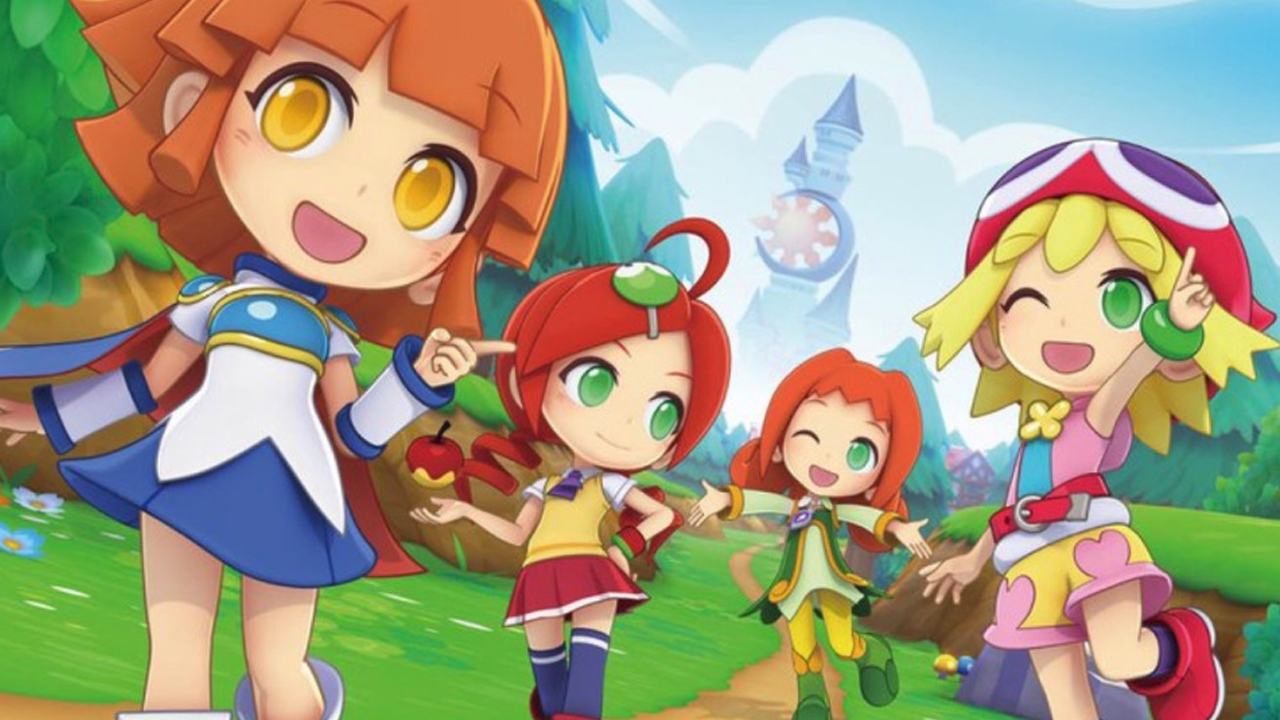 2011, 3DS/PSP/Wii/DS (Sonic Team)
Import-only, low language barrier
As we’ve shown in the past, this commemorative release is the best at compiling all the various modes and options of games in the full life of the series and putting them into one place. It also bridges the gap between the classic Compile-developed characters and the newer Sonic Team ones, representing more of the cast than previous releases. As such, it’s the most Puyo, and that could be what you want.

2016, 3DS (Sonic Team)
Import-only, low language barrier
An attempt at the Puzzle & Dragons formula, Chronicle preserves the trademark puzzle gameplay but implements all the trappings and RPG worlds you’d find in that franchise’s two 3DS entries. It’s weird to see — after all, Puyo Puyo is itself a spinoff of an RPG — but it has an appeal all its own.

1996, SNES (Compile)
Import-only, low language barrier
For the best distillation of the series’ classic era, you can’t go wrong with Tsu Remix. With four-player modes and balanced core gameplay, it’s the Super Street Fighter II Turbo of the Puyo series: the best version of its most popular entry.

Though it doesn’t have four-player support on the platform, the vanilla Super Puyo Puyo Tsu is inexplicably available worldwide on Nintendo Switch Online and almost as good! This may be, as a result, the most accessible Puyo out there. 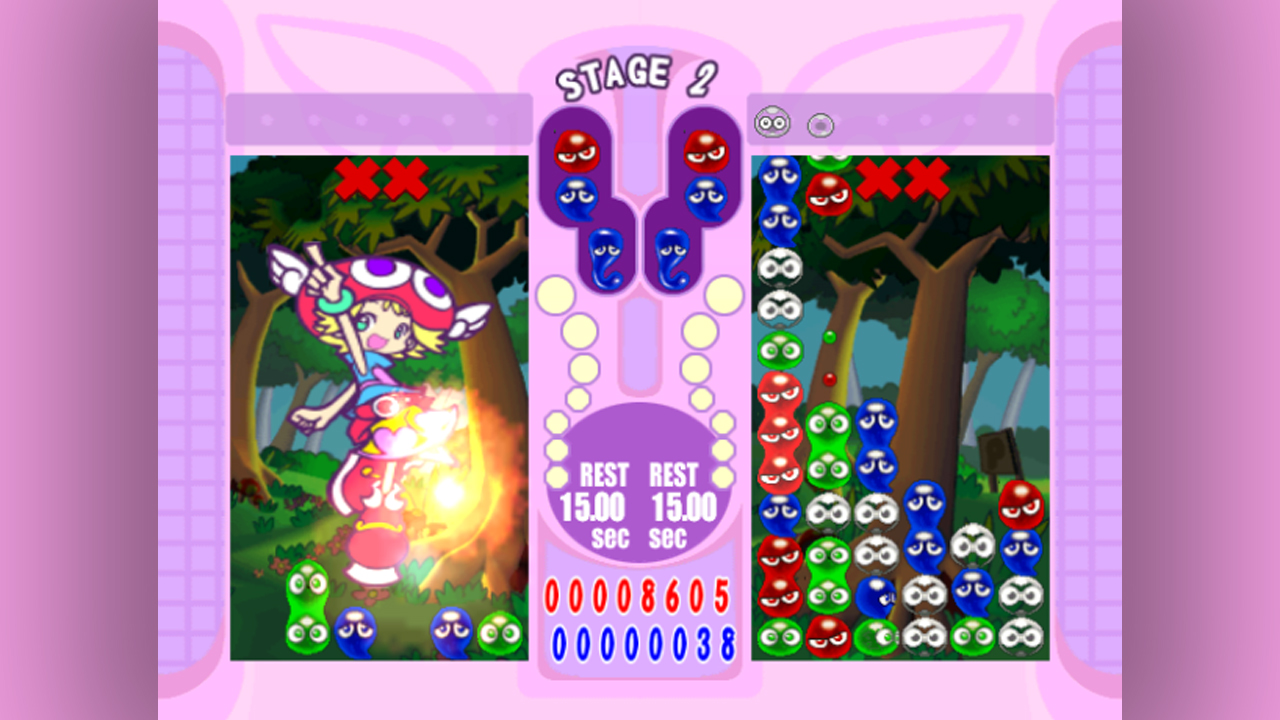 2019, PS4/Switch/PC (Sonic Team)
The newest entry in the franchise definitely brings some new options for high-level competitive play, but for beginners (which, if you’re reading this guide, is probably you), there’s actually not a huge feature list in this release. It focuses on the classic and Fever rule sets, and it does pack a few more character options from Puyo, but for most players, it’s Puyo Puyo Tetris with all of the Tetris and half of the Puyo removed. For more, read this!

2004/2005, GameCube/DS (Sonic Team)
Released on many other platforms in Japan/Europe
Before Puyo Puyo Tetris, if you wanted to play the game in English, you had to settle for this. And I mean settle, because the artificially-fast-paced version of the game it uses isn’t everyone’s cup of tea and the audiovisual presentation is tough to tolerate for hours at a time (and, if you’re playing right, a puzzle game should be able to hold your attention for that long). Still, with the right modes and selections, you can just play normal Puyo, and even without that it’s an important bit of history: it’s when Sonic Team took over development from a defunct Compile that had built Puyo from scratch.

2015, 3DS (Sega/Crypton Future Media)
A totally solid port of the Puyo engine built for games like 20th Anniversary can be found in this rhythm game’s extra options, and… well, it’s a really good release, so the bonus is particularly nice. 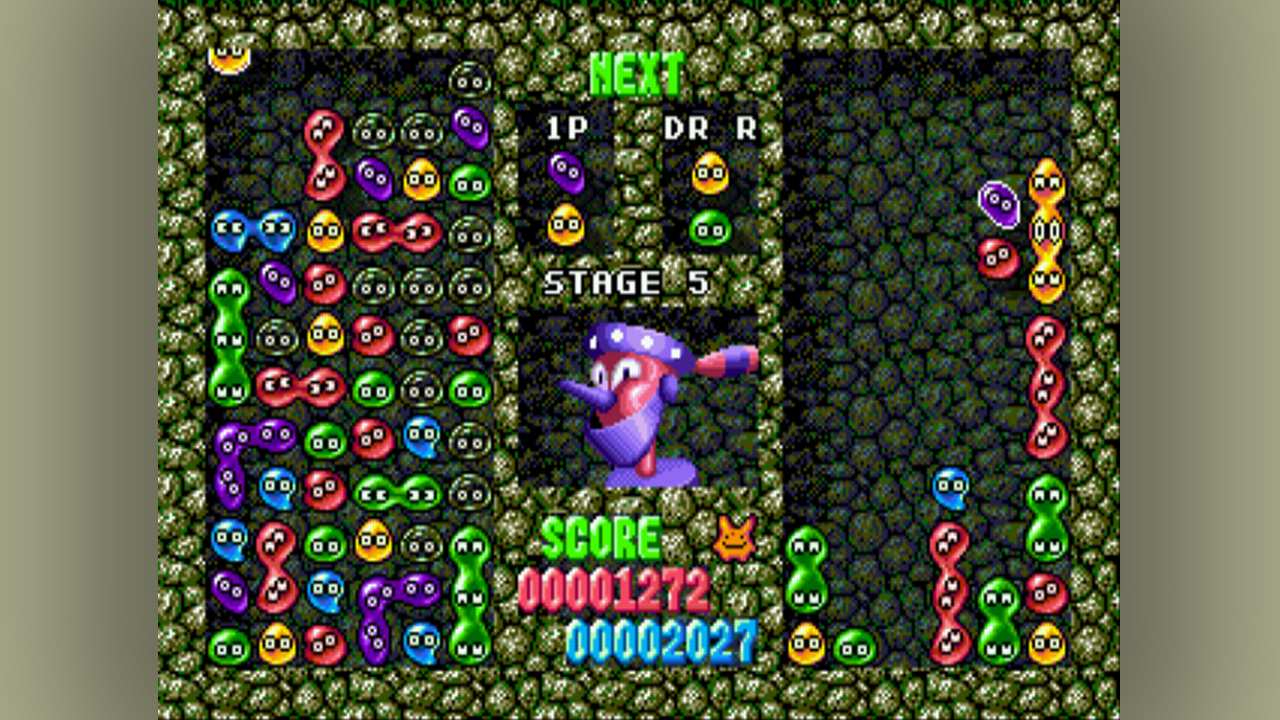 There are more Puyo releases than we can really discuss in one piece, so we’ll use this final section to talk about the quirkier or more notable releases that just don’t merit a spot higher on the list!

199X, Various
These are probably the way you first played Puyo! Which is nice, we suppose, but all these releases are based on the inferior first version of the game, so there are few reasons aside from nostalgia to dig back into these releases.

2015, Mobile (Sega)
Sega did try to take on the larger, phone-bound version of Puzzle & Dragons with this release, which it attempted to bring Westward (and failed miserably to do so) as Cranky Food Friends.

1998, Saturn (Compile)
Puyo Puyo Chronicle wasn’t the first spinoff-spinoff to return to Madou Monogatari‘s role-playing roots. This release didn’t retain any of the puzzle gameplay, but it did take the charicatures of the game’s story and return them to labyrinths for a Mystery Dungeon-style adventure.

1999, Dreamcast (Compile)
This is a rhythm game! That really has nothing to do with Puyo except a few characters, sort of! It’s weird! And not very good!

For more helpful advice for series newcomers, check out our Guides section.