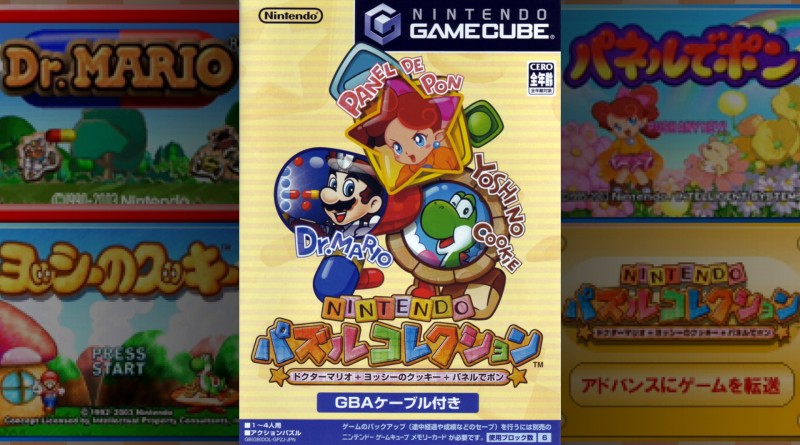 Nintendo’s certainly known for its platformers and adventure games (and around these parts, certainly its RPGs as well), but in that crowded group it’s easy to forget about just how great the company can be at puzzle games. Well hey! Nintendo Puzzle Collection is here to remind you.

Nintendo Puzzle Collection, a Japan-only GameCube release, contains three of the company’s most addictive creations: Panel de Pon, Dr. Mario and Yoshi’s Cookie. And while we never got this release, it should look similar: the Dr. Mario is essentially a direct port of Dr. Mario 64 (which, incidentally, never itself released in Japan), and Panel de Pon is similarly based on the game we know as Pokémon Puzzle League. The Yoshi’s Cookie part, on the other hand, is exclusive to this disc.

There are two interesting things about this collection. The first is its GBA connection functionality, which allows you to download versions of all three games to play on the go. It’s not that useful these days, but hey, it’s a curiosity! The second is that all three games support four players, a rare thing for many of these puzzle concepts and in some cases the only time that’s been available. The disc is worth an import for party Puzzle League play alone.

But hey, don’t take our word for it! Watch for yourself.

Topics include: Starting from the bottom and getting here, questionable credentials, bottomless stomachs, undeniable charm.