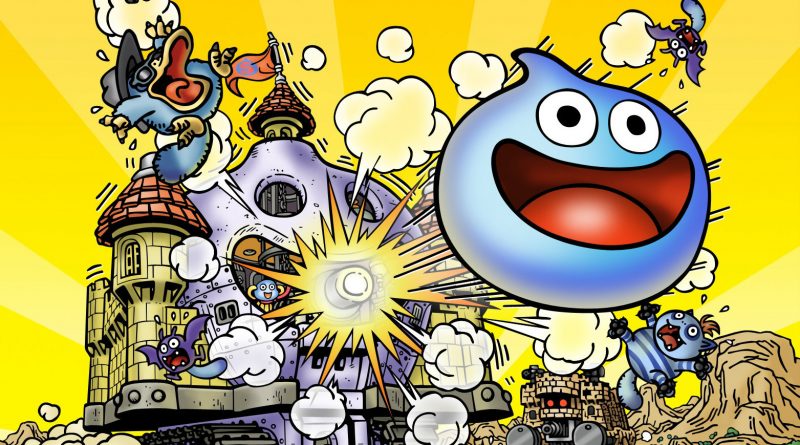 The Dragon Quest Heroes: Rocket Slime series is pretty great. It might be difficult for people outside of Japan to understand, because we have sadly only seen one game localized. Only the second installment, which appeared on the Nintendo DS in 2005 in Japan and 2006 in other regions, came and showed us the joy of careening around a world as a slime, goorabbing allies and enemies as you go. But, when placed alongside its contemporaries, it is easy to see the sense of progression and how a good thing gets even greater over the years.

Slime Morimori Dragon Quest was the game that started it all when it launched on the Game Boy Advance in Japan. It is the most simplistic of the three games, but contains elements that persists throughout every installment. Rocket the Slime’s family and friends have been taken by the Tail Brigade, a group of enemies that, as you may have guessed, all have tails. (Rocket was spared, as he temporarily looked like a Platypunk.) Rocket is limited in abilities. He can stretch, which lets him fly across areas when you let go and smack into objects with his Elasto Blast. This deals damage and can send things flying, allowing you to position yourself under them to grab up to three slimes, items or even enemies at a time. Throwing certain items can allow you to damage or break through parts of the world, and eventually Rocket gets abilities like the capability to burrow underground or hover.

The original Slime Morimori Dragon Quest built up exploration foundation and town restoration. Rocket needs to rescue villagers. You start with one location open. Once the poor slimes are saved from there and the Tail Troupe boss beaten, a new location opens up. Not to mention, rescuing each slime gets you a note from them that offers information that can help you on your journey and makes it easier to remove Slime Ton weights littered around town during the invasion that block access to helpful features. It can feel very basic, but there is this sense of growth as villagers return, the town is repaired and Rocket finds his way to every corner of the world to save so many slimes.

Dragon Quest Heroes: Rocket Slime takes the original formula and gives people more. Rocket is still the hero, he still managed to be the only resident in town not abducted by Plob due to them thinking he was a worm. This means going through dungeons again and saving the missing slimes. His Elasto Blast remains his go-to attack, though he does gain other abilities. The general progression remains the same. Crafting returns too. Enter dungeons, save slimes, defeat bosses, return to town to see what is unlocked, and continue.

While many things remain the same, plenty of things change for the better. Dragon Quest Heroes: Rocket Slime uses the bottom screen to show off the map, so you have a better idea of where you are going. The dungeons pay more attention to the passage of time, with different enemies during the day or night. The biggest addition happens to be tank battles, giving Rocket a new way to fight Plob bosses.

Tank battles have people preparing for attacks by gathering junk in dungeons to use as ammunition. Each sort of item has different specialties when used to attack a foe, which makes you think when gathering. You choose which three slimes join you as AI allies on your tank, with them having their own abilities too. When you are doing well, you can send Rocket himself to the other tank via the cannon, to do more damage. (Enemies can do this too!) There is even an arena in town that lets you compete in a tournament or another player.

Predictably, Slime Morimori Dragon Quest 3: Taikaizoku to Shippo Dan goes ahead and tweaks a little bit of everything to make it better, while keeping the good elements intact. We now have a 3D world, which makes things like the giant ships and dungeons pop. The story has us focusing on reclaiming seven stolen, sacred Rainbow Orbs from the Tail Troupe. Tanks are replaced with boats, that function similarly but offer more customization options. There is a full world map, which resembles our own world, to explore, with different locations and other ships sailing about.

With this entry, it was the social elements that received the biggest upgrade. The game has a Netshop, for acquiring items and helping you on your way. It even had online multiplayer for up to four players when the servers were online. McDonald’s restaurants in Japan went ahead and showed its support by having four exclusive items to download for the game. (Not to mention there was a tie-in McDonald’s Slime Ship Battle DX downloadable minigame that would give people a coupon for a discount on food for one day if they beat it!)

The Slime Morimori Dragon Quest series is one that built itself in increments. The original Game Boy Advance game starts with a solid formula, colorful world and gameplay that gradually builds and keeps you coming back. Dragon Quest Heroes: Rocket Slime, its sequel, increases the scope, adds tank battles and lets people play together. Slime Morimori Dragon Quest 3: Taikaizoku to Shippo Dan caps it off with even more content, a larger world, a story that gives you a different sort of purpose, naval battles with customizable boats and, for a time while servers were online, multiplayer battles for up to four people. It is great to see how things develop and improve, yet still maintain many of the same elements that keep it strong through the years.