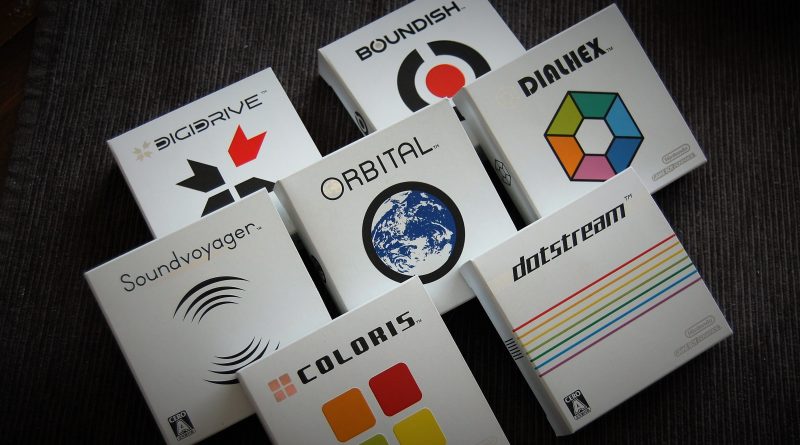 Western players are likely at least somewhat familiar with Nintendo’s Art Style games, downloadable WiiWare and DSiWare titles with a shared stark aesthetic and simple-but-addictive gameplay. They’re almost all worth checking out (though the names themselves are a nightmare to keep straight across regions), but did you know that they weren’t the first of their kind? Indeed, they were preceded by a seven-game lineup for the Game Boy Advance called bit Generations.

The bit Generations line was almost entirely developed by Skip, the team behind not only the Art Style games, but also some larger titles like Chibi-Robo! and its sequel, Park Patrol. The company’s a regular in import discussions, since it tends to make quirky, text-heavy games that don’t see a Western release (like Captain Rainbow and Giftpia). It’s weird, then, that these games have almost no text, and what is there is entirely in English, in that early-arcade-era sort of style. Each was packaged in highly stylized packaging, with special square shapes (normal Japanese GBA game boxes are rectangular) and consistent series branding to make the set look special.

But enough about that — to the games themselves!

The first in the series and possibly the least compelling, Boundish emulates the feel of paddle games like Pong in a context with a bit more variety. There are boards with speed-manipulating bubbles you can become immune to by being the last player to hit the ball into them, as well as boards set on a controllable turntable. There’s a two-on-two board that feels a lot like foosball, and there’s even a special game that has you juggling cubes in the air for as long as possible. Though it’s not great outside of small doses, Boundish does feature Download Play, letting you try these Pong-like games with real friends.
Re-released in U.S.?: Nope! This is the only way to play it.

The puzzle genre is a logical one to strip down to its essentials, and Dialhex is the first of two block-matching games in the bit Generations series. If you’re familiar with Hexic, you’ll have an easier time grasping this one, as you rotate triangles in hexagonal formations to make groups of the same color. The goal is to keep the board from filling, unlike many modern gem-rotation games that focus on not running out of moves, making it feel just a bit more retro in a way that works with this context.
Re-released in U.S.?: Yep! Art Style: Rotohex hit WiiWare in 2008, and met with a generally uneven response.

Racing games tend to have a very similar sort of setup and control, but Dotstream manages to do something decidedly different. As a colored line, you jostle for control of lanes through the track, avoiding obstacles, hitting boosts and picking up power-ups. The focus here is on doing as little as possible, really; moving up or down makes you lose ground in the sprint to the other side of the screen, so you’re always giving up position in the hopes of making up for it later.
Re-released in U.S.?: Yes, on WiiWare as Art Style: light trax. This version adds extra elements, like an overworld highway of sorts, and it also plays with the perspective in interesting ways.

For the most part, Coloris is a basic puzzle game, with players matching colored blocks to clear them from the board and send others falling down in their place. What makes it the type of game to lose yourself in for hours, though, is the control scheme. Blocks all range in hue from one extreme to the other (depending on the level, the colors change), and hitting the button shifts a block one shade closer to the side of the current cursor highlight. The game could be problematic at times for colorblind players, so keep that in mind if that could affect your enjoyment.
Re-released in U.S.?: Unfortunately, no.

Gravity! Orbital sets players out as a burgeoning planetary body, using A and B to pull or push itself from the nearby gravitational forces and navigate space. Generally, you’ll be trying to align into orbits around planets and such while avoiding increasingly devious obstacles, but the real appeal of Orbital can range from a relaxing drift through the galaxy to Lunar Lander-style precision movements.
Re-released in U.S.?: Indeed. Art Style: Orbient, a WiiWare release, very much kept this formula, and the increased fidelity and scope meshes well with the intended aesthetic.

So now we arrive at the weirdest game in the bit Generations line. The game is designed to be played almost entirely through sound, with only a beginning level showing players just exactly what they’re controlling. There are times when virtually nothing is on the screen, and I’d imagine that blind players would have no trouble with this one. The mechanics themselves aren’t particularly special: move from side to side to collect orbs. But the execution is worth checking out, if only once.
Re-released in U.S.?: No. You’ll have to track down this cartridge to give this special sort of game a try.

Remember when I said the series was almost entirely developed by Skip? This is the exception. Q-Games, known for the PixelJunk series as the handheld Star Fox games and a smattering of DSiWare titles, made this game in which players direct colored “cars” to turn at an intersection, trying to sort them as best as you can for more points. It gets complicated as more elements are introduced, making the simple act of directing colored arrows in directions into a maddening sort of experience. (Maybe maddening in a good way, though?)
Re-released in U.S.?: Yes, as DSiWare title Art Style: Digidrive.

If you can track them down (which can be tough these days), the bit Generations series is as cool to have on your shelf as it is to have in your GBA. Here’s to hoping we haven’t seen the end of these cool Skip experiments! Maybe they’ll be back on the Switch?

This article originally appeared on Snackbar Games, and is republished and revised with permission.